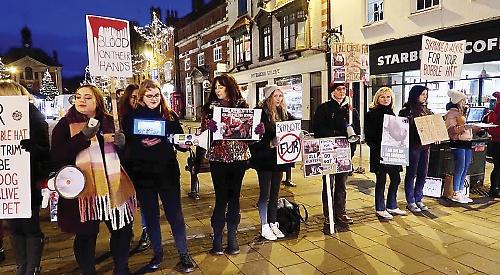 ANTI-FUR protestors staged a demonstration in Henley on Saturday.

About a dozen members of the Reading Vegan outreach group stood in the town centre for about two-and-a-half hours chatting to passers-by and handing out information.

The protestors also stood outside shops that sell clothes and accessories using animal fur and held placards with phrases such as “fur is dead” and “skinned alive for your bobble hat”.

They used a laptop to show images and footage linked to the fur trade.

The group decided to protest in Henley after some of the members complained about what some of the town’s shops were selling.

A spokeswoman said: “We have some colleagues who work in Henley and had been in a couple of shops which had some real items of fur. One of them had gone into a shop and asked about a jacket and the assistant said they weren’t sure whether it used racoon or fox fur.

“Real fur is abhorrent to most people and it is really shocking that you might be going Christmas shopping where they are selling real fur.

“Some people may not even realise that they are wearing fur. Fur in itself is totally unnecessary when there are plenty of good alternatives that are both warm and fashionable.”

The group says it is not anti-business. The spokeswoman said: “We want to inform the public so that they know what is out there. We are a peaceful group and not aggressive.

“We had a huge response from people in Henley and that was really warming. So many people asked us for information while some said they were fed up with having certain shops selling fur.”