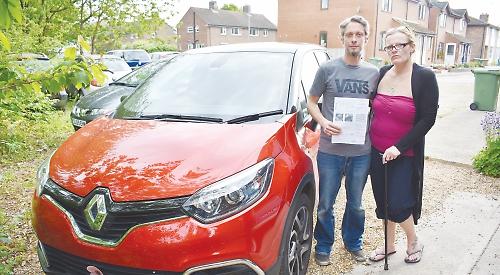 MORE patients have complained about being unfairly fined while parking at Townlands Memorial Hospital in Henley.

Their protests will increase the pressure on the NHS to sack Smart Parking, the company which enforces the hospital car park.

The company has already lost its contract for the neighbouring GP surgeries following dozens of complaints about unfair fines.

It uses automatic number plate recognition cameras to log vehicles entering and leaving the hospital car park. People visiting the hospital have to enter their registration details on a keypad at reception to receive free parking and there is meant to be a 20-minute grace period for those passing through or dropping off patients.

Dozens of patients have contacted the Henley Standard to complain that they have been issued with unfair fines of up to £160 and many have been sent letters threatening them with court action if they refuse to pay. Read associated story: "Don't pay says woman who had fine overturned"

Hazel Birrell, 59, of Gainsborough Hill, Henley, was issued with a ticket at Townlands on May 10 after taking her husband Duncan for a 45-minute physiotherapy appointment.

“I’m so furious I’ve written to John Howell and left a review on the hospital’s website.”

Mr Birrell added: “I’m worried because I’ve got to go back up there and I don’t want to take the car now. I have two appointments on Thursday and getting up the hill on foot will be a struggle.”

The couple don’t intend to pay the fine and want to see Smart Parking’s contract cancelled and replaced with a new system.

Mrs Birrell said: “I’d rather have the system they have in Didcot where you get two hours for free and pay if you go over that. Even what they have at Waitrose would be better, or a little man to monitor it.”

Andrew and Ailsa Milne-Furneaux were fined after visiting the hospital on March 28.

The couple, of Bradley Road, Huntercombe, spent about an hour at the hospital for Mrs Milne-Furneaux to receive some physiotherapy following a knee operation.

They were annoyed to receive a ticket in the post a few days later and then lose an appeal.

Mr Furneaux, 43, a rocketeer, said: “My wife doesn’t drive and can’t take public transport so I have to drive her.

“We’ve been going for months and always put in the registration number. The kids fight over who can put it in. I have no idea why it didn’t like it this time.

“We had proof of the appointment, so I wrote to the company and assumed they would write back and say that we didn’t have to pay it.”

The couple are now considering taking their case to the Parking on Private Land Appeals service.

Mrs Milne-Furneaux, 45, said: “It makes me feel like I don’t want to go for another appointment. Either that or I’ll end up parking in the doctors’ car park, which clutters that up. You should get a ticket from the hospital to put on your car windscreen. Then people with a valid appointment wouldn’t get a fine.”

Mr Furneaux added: “The parking should be free for the people of Henley.”

A spokeswoman for NHS Property Services, which owns the hospital site, said: “Discussions are taking place with Smart Parking to see where improvements can be made to the experience of patients using the car park.”

Last month, Martin Steele, chief operating officer of NHS Property Services, said he had told the company to change the way it enforces the car park to “significantly improve the experience of patients and their families”.

In a letter to Henley MP John Howell, Mr Steele said: “We have held several meetings with Smart Parking regarding these issues and made it clear to them that the current situation is unacceptable and urgent changes are expected.”