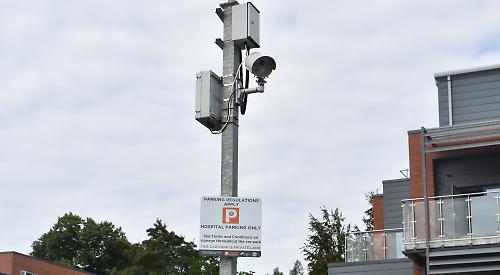 RESTRICTIONS could be re-introduced at the car park for Henley’s two GP surgeries.

The move follows the decision to replace the company that enforces the car park for the neighbouring Townlands Memorial Hospital after numerous complaints from patients about unfair fines.

Smart Parking also used to monitor the car park for the Bell and Hart surgeries but its contract was cancelled by the doctors after only a few months due to the overwhelming number of complaints.

Now NHS Property Services, which owns the Townlands complex site off York Road, is tendering for a new company to run the hospital car park and others elsewhere in England.

It is also in talks with the GPs about a new scheme covering both car parks while the one for the Chilterns Court Care Centre, which is also on the site, could continue to be enforced by Smart.

In a joint statement, they said: “Both car parks are just about at full capacity and it is challenging to find a solution that works for both patients and staff.

“We will be taking any proposals to our patient panel for discussion, with our main priority remaining that those who are unable to walk far can park near to the surgery for their appointments. This may not necessarily mean we introduce the same system as the hospital.

“We want to learn from our mistake in the past when we introduced a parking system, in good faith, with our patients’ interests at heart, which ended up causing more problems than it solved. We wish to apologise to everyone affected by this.”

The surgeries cancelled their contract with Smart in August last year but enforcement didn’t end until November following a 90-day notice period.

No new provider was brought in and instead the surgeries urged shoppers not to abuse the spaces at their car park, which was the problem that prompted the introduction of enforcement in April last year.

The GPs say the spaces should only be used by those who cannot park elsewhere due to health issues.

A message on the surgeries’ website asks patients to be “considerate and neighbourly” and only use the car park if they need to and only for the duration of their appointment.

However, there are now complaints that the car park is frequently overcrowded and patients are unable to find a space.

The decision to effectively sack Smart from the hospital was revealed by the Henley Standard last month in a victory for our Not Very Smart Parking campaign.

Health minister Stephen Barclay said the company’s performance “has not been satisfactory”.

This followed numerous calls by patients, relatives, councillors and Henley MP John Howell for the firm to be axed.

He said: “We discussed the sort of system we need, one that maintains the ability of the car park to keep shoppers and other people visiting the town out to allow patients to get in. That needs to be a simple and effective system.

“We will make sure this is an improvement on the lives of patients and people visiting them.”

Mr Howell added: “We discussed a number of issues, including the status of Smart Parking. We are looking forward to them being replaced by a much better company in future.”

Visitors have to enter their car registration details using a keypad at reception to receive free parking and there is meant to be a 20-minute grace period for those passing through or dropping off patients.

But scores of patients said complained about being fined of up to £160 for parking at the hospital despite following the rules.

Some were also sent letters threatening them with court action if they refused to pay.

Others claimed they were fined despite leaving the car park within the grace period, while several residents of nearby roads said they received notices after driving through the site on their way to and from their homes, even though they had not stopped.