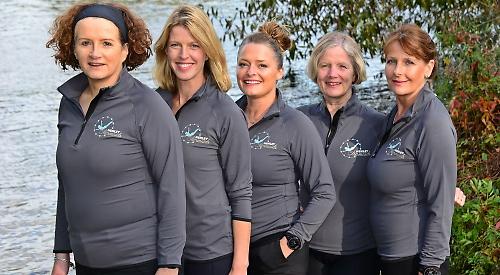 A GROUP of women who aim to swim the English Channel for a Henley charity this summer have been training despite the river being swollen and cold.

Laura Reineke, Jo Robb, Susan Barry, Joan Fennelly and Fiona Print — known as the Henley Mermaids — all belong to the Henley Open Water Swimming Club and are being supported by fellow members while training in the Thames.

They are raising money for Henley Music School, which Mrs Reineke founded in 2010.

The water temperature has been as low as 3C in recent weeks but the women have swum anyway, including on Christmas Day and New Year’s Day as well as at night when they usetorches on tow floats.

They also went for a swim on Mrs Reineke’s 48th birthday on December 30 and enjoyed cake and Prosecco afterwards.

She said: “You can lose fitness very quickly, so we are trying to keep the momentum going. You can’t let it slip. We just have to get fitter in order to have the resilience that we need for the challenge.

“The river has been in such a state that we have had to walk a long way to get to a safe spot. We don’t want to be too specific about where we are swimming because we don’t want to encourage other people who might not be as experienced. Some of these stretches of water are very dangerous and we are very used to doing it.

“The only difficult thing has been getting the distances in because it has been so cold. You can’t afford to spend too long in the water before you freeze.

“It is not necessarily about swimming distances but just dipping in and spending time in the cold water. Spending time in the water will be just as important for the challenge, maybe even more important. They won’t let you do it if it’s too challenging but we may have to face some difficult conditions.”

The women have also spent time swimming at Henley leisure centre and Wycombe Rye Lido, where the heated pool is a much more comfortable 22C.

They will attempt the relay swim from Dover to Calais in June.

The challenge is at least 21 miles and is expected to take them 14 hours. The women must swim for an hour at a time and they will be guided by boat pilot Eddie Spelling.

Their fundraising target is £8,000 and they have already raised well over half but it costs £4,000 just to take part.

Among their supporters are the Henley Manor Care Home, Orchard House financial advisers, the Henley Business Partnership and members of Huntercombe Golf Club. The music school was also one of the beneficiaries of the Henley Living Advent Calendar. Mrs Reineke, who lives in Berkshire Road with her husband Antony and three children, said: “We have had great support from the local community.

“The fundraising is going very well. It has reached lots of people that we have not heard of before.

“Half of our target is just to take part in the event. You need a pilot, a boat and a crew to plot your route through the shipping lanes.”

The Mermaids’ next team outing will be with other members of their club for a relay race in Bled, the Slovenian town twinned with Henley, next week.

They will then travel to North Wales on February 29 for the Welsh Winter Challenge.

Mrs Robb, a South Oxfordshire district councillor, has still to complete her qualification for the Channel swim, where she must spend two hours in water below 16C, as she has been too busy.

She was the Green Party candidate for the Henley seat in last month’s general election. The 42-year-old, who lives with her husband Philip in Shepherds Green, is the youngest member of the Mermaids.

Mrs Robb said: “I was really busy with the election and then Christmas happened, so now I am getting back into it. The river was really dangerous over Christmas, which made it quite hard to get out. The flow is still really fast.

“For me, the qualification swim is the primary worry. I have had sleepless nights about it and thought I might not be able to do it but we have got to keep training and put in the hard work.

“We have all been told by members of the club that we could do with gaining some weight.

“I probably need to put on 3kg of fat to be able to cope with the cold. I find it hard eating breakfast but I am having to force it down.”

Mrs Barry, 52, who lives in Cromwell Road with her husband Mike, is a teacher at Emmer Green Primary School.

She has previously completed the Club to Pub Swim in Henley and the Henley Marathon.

Mrs Print, who has also still to qualify, lives in St Mark’s Road with her husband John.

She has been a nurse at Townlands Memorial Hospital since it was rebuilt three years ago and previously worked in the intensive care unit at the Royal Berkshire Hospital in Reading for two decades.

• Henley Music School, which provides music tuition for children, regardless of their ability, costs around £60,000 a year to run.