Save money and help the planet with solar panels 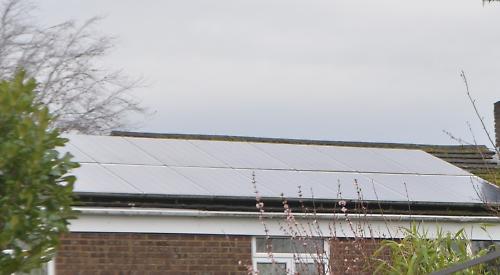 REBECCA Chandler-Wilde says her family has always been concerned about the environment so it made sense to have solar panels installed at their home.

The retired management consultant and her husband Simon, a maths professor and dean at the University of Reading, decided to have them fitted on the roof of their house in St Andrew’s Road, Henley, in 2011.

At the time, their daughters, Helen, 25, who is a Telegraph journalist in London, and Rosie, 20, who is studying psychology at Exeter University, were still living at home.

Mrs Chandler-Wilde says: “We went on holiday to Germany to see the Black Forest and there were lots of houses with solar panels. It was just normal out there. This was just before we got the solar panels, so I would say that was the catalyst.

“We have always been concerned about the environment but I would say it is more my interest. I have always had a great interest in environmental issues as well as having a desire to act on it.”

The 14 roof panels cost them £13,000 at a time when the Government was offering a feed-in tariff, a payment for supplying any surplus energy back into the main grid.

Thanks to that and the savings they made on their energy bills, the system had paid for itself by last year and now the family will continue making money for the next 16 years.

The tariff was scrapped last March but this month the Government introduced the smart export guarantee, which is similar in all but name.

Furthermore, the price of solar panels has dropped considerably, which is why Mrs Chandler-Wilde is leading Solar Streets, a campaign by Henley Town Council’s climate emergency group to encourage other residents to follow her example. The group aims to make Henley carbon neutral by 2030 and the project is the first of five that will be introduced to help the town meet the target.

Public meetings will take place in the town hall later this month for people to find out more about Solar Streets and sign up.

The group has partnered with IDDEA, a renewable energy firm based in Wiltshire, to offer residents the opportunity to have 14 solar panels fitted for £4,000 with small reductions for fewer panels.

Just like in the Chandler-Wildes’ case, the system will pay for itself from the savings on energy bills, although how long that will take depends on current usage.

Additional equipment, such as batteries to store the energy that is generated, can cost between £2,500 and £5,000 but is particularly useful to households who are out during the day and would find it hard to adapt their lifestyle.

IDDEA developed the system after the town council in Frome, Somerset, requested a solution for residents who wanted solar panels at an affordable rate. The town’s population is about twice as big as Henley’s but 70 homes have already taken advantage of the scheme.

Mrs Chandler-Wilde says: “The Solar Streets model is reducing the costs of solar panels by making it extremely efficient to install them.

“They put residents into a pool to say they are interested so they can buy the panels in bulk and they have their own scaffolding equipment. They will then hit the town all at once, going from house to house, which makes it much more efficient.

“The price does not change regardless of how many people are interested. I appreciate that £4,000 is still a lot of money for some people but it is an investment and saves you money in the long term. If you buy a car, that loses value over time, but with this it keeps saving you money. There is the upfront cost but over time you reap the rewards.

“In Frome it is ongoing but so far they have got 70 houses. If we could get that number we would be absolutely delighted but really any number would be great because it is all about reducing carbon emissions and saving people money.

“You are doing your bit for climate change but you are also saving money, so it is beneficial to you and the environment. Solar panels are such a worthwhile investment.”

Mrs Chandler-Wilde’s own experience is evidence of the benefits.

She takes a reading from a meter in a cupboard under the stairs to show how much energy her panels have generated. (More energy is generated in the summer months due to the sunshine.)

British Gas then sends her a report to show the payment value of that period. All of these payments combined have totalled more than £13,000, meaning the panels have now paid for themselves.

IDDEA, which was established in 2007 and has worked on more than 800 solar projects across the South-West, offers a free, no obligation survey of your house and will be able to offer advice on what system will work best depending on the design of the property and the lifestyle of the owners.

The company donates £50 from every installation to a community project, such as fitting solar panels to a school or other public building.

Michael Lamerton, head of sales and marketing for IDDEA, said: “Our two tag lines are that it helps you take control of your energy bills and to tackle climate change. We are facing an unprecedented emergency but we can do something about it. If you talk to any of our customers we are very highly recommended. For a 4kW system, on average you will save a ton-and-a-half of carbon from going into the atmosphere every year.

“A young family who find it difficult to make lifestyle changes will benefit hugely from a battery and they have the same payback period in terms of savings compared to just buying the panels.

“Energy prices have increased by more than six per cent a year in the last 10 years and it is only going to get more expensive. You will be helping to fight climate change but you will also be taking control of your energy bills.”

He added: “We are delighted that Henley has joined this scheme. A lot of other councils have been dipping their feet into trying to tackle climate change but Henley is actually doing something about it.”

• Anyone interested in finding out more about Solar Streets can attend one of the public meetings to be held at Henley town hall on Thursday, February 27 at 12.30pm and 7pm. Anyone who is unable to attend a meeting should call 01380 726999 or email info@iddea.co.uk