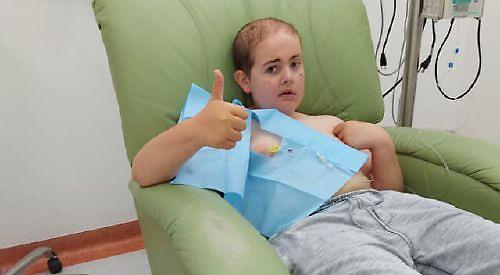 A TEENAGER whose cancer has returned has started new treatment in Mexico.

Charlie Ilsley, 13, of Buckingham Drive, Emmer Green, was first diagnosed with a brain tumour in 2015 and has had various types of intensive treatment since then as the disease spread.

His latest scan revealed a tiny tumour in his brain and he is now undergoing a new form of immunotherapy in Mexico City, where he has already had treatment.

He had his first session on Monday when two drugs were injected directly into his spine and will have other sessions on Monday and Thursday before flying back home with parents, Toni and Mark.

Mrs Ilsley said her son was doing well after the first round and enjoyed a soak in a hot tub afterwards as his back was sore. She and her husband were not allowed near the operating theatre because of covid-19 restrictions. The family need to raise another £15,000 to help pay for flights, accommodation, treatment and Charlie’s hospital stay.

Mrs Ilsley has given her job at the Day Lewis pharmacy in Sonning Common following her son’s latest scan, which showed the 1.5mm tumour in his cerebellum.

The only consolation was the doctors saying it had grown very slowly rather than aggressively.

Charlie, a pupil at Highdown School in Emmer Green, currently has no symptoms and his mother says he eats and sleeps well and enjoys playing on his PlayStation with his friends online.

Following his diagnosis in 2015, Charlie underwent a 10-hour operation and had 31 sessions of radiotherapy followed by chemotherapy before being given the all clear. Then in spring 2018 two tumours were discovered on his spine.

Charlie was given the all-clear for a second time in August last year after undergoing specialist radiation treatment in Turkey which his family had to raise the money to pay for.

Earlier this year, the Ilsleys were told that the chemotherapy and immunotherapy treatment that Charlie underwent had failed. Charlie then had three weeks of CAR-T cell treatment, a form of immunotherapy, in Mexico last month, which cost £25,000.

To make a donation, visit www.justgiving.com/crowdfunding/teamcharlie2020

• Tesco in Henley held a fundraising day for Charlie’s treatment on Saturday and raised £705 from bucket collections from shoppers.