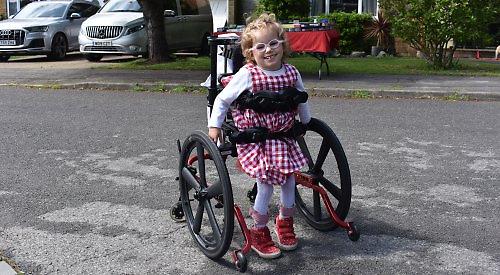 A STREET party was held in Wargrave to raise money for specialist treatment for a little girl with cerebral palsy.

Isla Pearce, three, suffered a hypoxic incident at birth and had to be resuscitated before spending the first five weeks of her life in intensive care.

She has quadriplegic cerebral palsy, which affects all her motor skills and she is not yet able to sit, crawl, roll, or walk unaided.

Her ability to speak and swallow are also affected so her weight gain is very slow. She had a special feeding tube inserted into her stomach last year to help her grow.

Isla, who lives in The Copse with her parents, Richard and Debbie, has weekly physiotherapy and other forms of intensive therapy, including conductive education, hydrotherapy and SaLT, a speech and language therapy.

However, there is little provision for intensive therapy in the UK so her parents are taking her to America and Australia for three weeks next month for treatment by the Neurological and Physical Abilitation Center.

The couple are trying to raise £10,000 for the treatment and needed only another £2,500 before the party over the bank holiday weekend.

Neighbours decorated their homes with red, white and blue bunting and sold strawberries, coffee, chocolate, books, games and toys. Children set up games such as mini golf and football.

Quinn Bookless, 10, who also lives in The Copse, came up with the idea of a bake sale with her younger sister, Ula, eight.

She said: “We were playing outside and Isla was in her chair so we thought, ‘How about we raise some money for her so she can play with us when she’s older?’ As time flew by it started getting bigger and we thought of more ideas.” Quinn, who lives with her parents, Dannii and Richard and her younger brother Connor, said she had enjoyed the weekend.

Genevieve Reynolds-Kasprzyk, who also lives in The Copse, decided to help the children with their street party.

She said: “Dannii, Quinn’s mum, said the girls wanted to do something and asked if I wanted to help and I do get a little carried away with these things — I was baking until 10.45pm.

“I thought if we were going to do something, let’s go big, so I had visions of the bunting and everything. We did the majority of baking ourselves and lots of people who live locally brought things along as well.”

Mrs Reynolds-Kaspryzk, who lives with her husband Marcin and their four boys, Dexter, nine, Felix, seven, Jasper, five, and Spencer, 18 months, said Isla was a “gorgeous and happy” girl.

She added: “We have a great community here and we’ve got just so close over the lockdowns.”

Mr Pearce and Mrs Lang, who have lived in The Copse for almost three years, said they were grateful for the efforts of their neighbours.

Mrs Lang, 45, who used to work in radiography, said: “I feel quite emotional, absolutely overwhelmed that people would go through this much effort for us.

“It’s incredible because hopefully it means we can access more for this little girl as she deserves it — she didn’t ask for this.”

Mr Pearce, 47, who works for an IT company, said: “We’re very humbled. It makes people aware that children and adults with cerebral palsy are part of this community. We’re fortunate to have that support.”

Mrs Lang added: “I think sometimes people don’t know what to think or say but we don’t want to shy away from it — we want to say, ‘Here are all her positives’.”