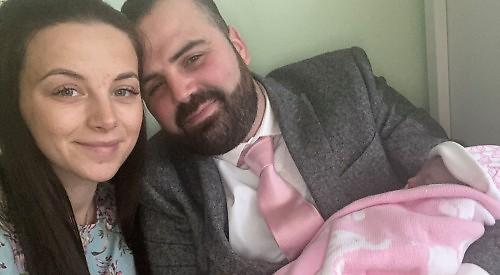 A COUPLE who had a stillborn baby girl are fundraising for a “cuddle cot” to help families enduring the same experience.

Jordan and Hannah Greenwood, from Henley, say that having one when they lost their daughter Isabella allowed them to spend precious time with her before she was buried.

Now they are raising money so that the Royal Berkshire Hospital in Reading, where Mrs Greenwood gave birth to Isabella, and other hospitals in the area can have more cots for families requiring them.

A “cuddle cot” is a machine that helps keep the baby at a cooler temperature for a number of days so that their features don’t change.

It can be connected to a bed, cot or Moses basket and enables grieving families to spend more time with their baby before the funeral.

Midwives say this additional time allows the parents to form an important bond with their baby, helping them deal with their loss.

Mrs Greenwood, 28, said: “We lost our daughter last year and we want to give something back in her memory.

“I believe it is so important to give families this choice during the most heart-breaking time of their lives to help deal with the grieving process.

“There are so many families out there that have been through it and most people have no idea about it.

“It’s a big thing to want to spend time with your baby as something like this happens to you.”

She was eight months pregnant in July last year when she haemorrhaged after suffering a placental abruption caused by a blood clot.

Mrs Greenwood said: “That morning I was feeling really unwell but couldn’t pinpoint why.

“Then I started haemorrhaging and Jordan called 999 and they rushed me into hospital. Eventually they gave me a scan and saw that Isabella had passed away.

“It was so fast that there was nothing we could have done. Initially the thought that I had lost her wasn’t even an option.

“The bereavement team came in and explained what a cuddle cot was. They said, ‘This is your time to spend with her, it’s your choice if you want to do that.’ They explained that the cot would stop her body from changing.

“We did expect to have a baby and to bring her home so I wanted to spend time with her. They asked me if I wanted to bath her and to dress her — she looked just like a new-born baby and it would have killed me not to see her.

“My mum stayed with me that night and Isabella was next to me in the cot. I just couldn’t leave her there before the funeral.”

While his wife remained in hospital, Mr Greenwood, 30, an engineer, went back home to their son Oliver, who was four at the time.

Mrs Greenwood, who works as a nanny, said: “I kept thinking, ‘I’ve got to go home and tell Oliver his sister is in heaven’. We eventually explained everything to him.

“He said, ‘Mummy, I want to meet Isabella’ so I had to explain to him that she would not move or cry. I wanted him to understand that she was not alive but that she was here.

“He wanted a sister so much and I had to tell him that mummy’s tummy didn’t work for Isabella as it had worked for him.

“We explained that she was here now but that she was about to be handed over by the midwives to go to heaven.”

For the following 17 days, the couple went back to the hospital and spent up to two hours a day with the baby in the cuddle cot.

In order for the baby’s features to remain intact, a cooling pad is placed in the Moses basket, crib or bed and connected by an insulated hose to a cooling unit. Mrs Greenwood said: “Thanks to the cot, I know her as my baby and I could tell you all of her features — she has dark curly hair and long fingers.

“When I picked her up, she would be cold and I would cuddle her to make her warm. The more time we had with her, the more we got to know about her — every day there was something new we learned about her.

“I understand if there are parents who would choose not to see the baby but I would have felt guilty not seeing Isabella. I can see both sides.

“A midwife told me to always speak about her in the present tense because she is here and she is Isabella.”

Thanks to the cot, Oliver, Mrs Greenwood’s parents and her mother-in-law were able to see Isabella and spend a few hours with her.

Mrs Greenwood said: “The bereavement team would let us know of any changes in Isabella’s body when we weren’t there.

“After four days, we took Oliver to meet her, as he had asked. He looked at her and said that she was really beautiful but did not want to hold her. We spent two hours with her.

“After that day, he stopped asking questions because it helped him understand that she is real. Had we not had a cuddle cot, we wouldn’t have been able to do that. There is a special little book in the bereavement room at the hospital and it was just rammed with names and memories — that is how many families have been in that room and have been through the same thing.”

Isabella’s funeral took place on July 22 at St John the Baptist Church in Kidmore End, where Mrs and Mr Greenwood were married in 2019.

Isabella’s coffin arrived on a horse carriage and after the service pink balloons were released.

To mark what would have been her first birthday, clothes and toys were donated to the hospital and to children’s charities and the couple plan to make donations to mark her birthday each year.

Mrs Greenwood said: “No one thought it was strange for us to want to spend time with her. Our families knew that it was important for us to meet her — I gave birth to her and she was real.

“I take offence when she is not included in Christmas cards, for example. She is our middle child.

“If my family never mentioned her, I would say something — she was here and everything was planned for her to be here.

“Oliver especially talks about her often and for us the most important thing is that he now has a way of dealing with it and feels comfortable with it.”

When Mrs Greenwood became pregnant again this year, she decided not to tell most of her friends and family.

She said: “When something like that happens to you, it masks that perfect life you think you have.

“I had counselling and therapy after Isabella and couldn’t bear to listen to people saying the pregnancy was going to be fine because last time it wasn’t.

“I remember getting into the car without Isabella and crying, seeing other parents going home with their babies.”

Mrs Greenwood said: “We told friends and family about our fund-
raising and we thought it was going to take a long time but the kindness of strangers has been incredible.

“I also thought, ‘What if there’s only one cot and multiple families needing one?’ Not everyone would be allowed that precious time, so we want to be able to donate additional ones.”