Toads on move in mild spell 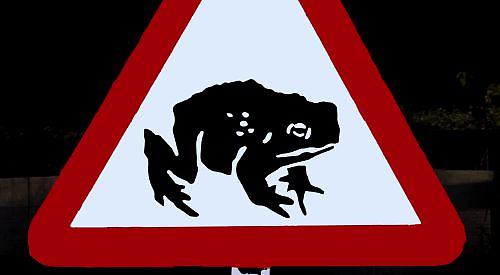 MORE than 500 toads have been helped by the Henley Toad Patrol this week.

Volunteers transported them across Marlow Road at Oaken Grove Wood on the Culden Faw Estate to their spawning pond.

There were also almost 100 frogs and newts, all prompted by the rise in night-time temperatures.

John Sumpter, a member of the patrol, said: “The relatively mild and sometimes wet weather in the past week has encouraged the first toads to head for their spawning pond.

“The volunteers carry the toads in buckets and release them into the pond.

“Most of these toads were males which migrate a little before most females as they want to be in the spawning pond when the females arrive.

“So far this year, a total of 595 toads have been helped across the road. Last year, we helped almost 6,000 in total in February and March.

“This is one of the largest toad populations and it deserves our support.

“The woodland and the breeding pond are a part of the Culden Faw estate, which kindly allows the patrol to erect a lengthy barrier to prevent toads from getting on to the road.

“Toads can migrate considerable distances in order to breed. They show extreme site fidelity, meaning that adult toads return to spawn in the same pond that they left as tiny toadlets a few years before.”