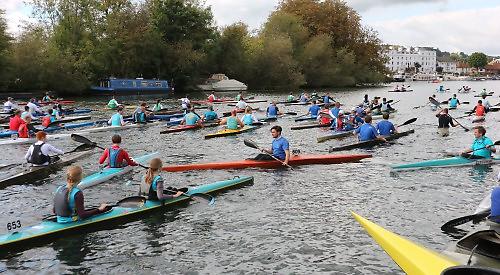 THE first race of the 2017/18 Southern Region Hasler Series was hosted by Henley Canoe Club at the Eyot Centre on Sunday.

Cool, dry conditions with just a light breeze made for almost perfect conditions where more than 260 paddlers competed from as far away as Poole and Cambridge.

Divisions 7 to 9 were raced over a 6km course from the Eyot Centre around Temple Island and back, Divisions 4 to 6 raced 13.2km to near Medmenham and back and Divisions 1 to 3 raced 17.1km to Hurley and back. The longer races included a portage at Hambleden lock.

Representatives from Henley included Nell Priestley and Oscar Newton in the lightning class for nine and 10-year olds, in Divisions 7 to 9, Poppy Priestley and Phoebe Houldsworth-Bianek in a K2 and Dave Corke and Richard Masey both in K1s.

Heading off in the other direction for two laps of the islands opposite Mill Meadows, the lightning class for U10s and U12s took place at the same time.