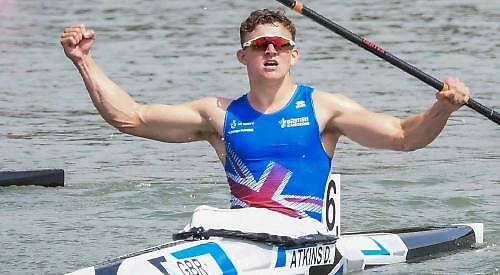 IT took Reading Canoe Club’s Dan Atkins just 36.835 seconds to power down the 200 metre course at Pitesti in Romania and win gold and the world champion title in sprint kayaking.

Over the previous two days Atkins had dominated both his heat and semi-final and was one of the favourites to win. In a close race, second place went to Germany’s Tom Maassen just 600ths (0.062) of a second behind him and Spain’s Gabriel Martinez took third place just 100th of a second behind that.

Speaking after his win Atkins said: “I didn’t know if I’d won it, but then I saw the scoreboard and heard the cheers from the crowd (the home team and rest of the GB squad) and knew I’d won it. It was a great race.”

He was back in a boat in the afternoon, racing K4 (four-man boat) with Freddie Kemp, Andras Kereszturi and Philip Miles where they finished 11th overall in the 500 metre K4 event.

Atkins and fellow club sprinter Kemp have trained this year alongside the UK’s reigning 200-metre Olympic champion Liam Heath MBE and his coach Eric Farrell. This is the second title Atkins has won in the space of two weeks as he took gold and European champion in the Czech Republic just 14 days earlier.

Caversham-based Reading Canoe Club, had four of their paddlers at the World Sprint Canoeing and Kayaking competition this year – an event which attracted entries from 63 countries and the world’s top U18 and U23 sprint canoeists. Besides Atkins and Kemp, Sam Glover competed in the U23 500-metre K4 and Anna Palmer in the C1 and C2 canoe events.