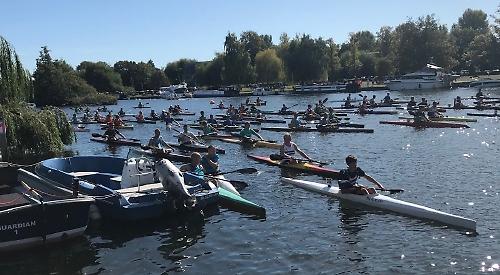 HENLEY hosted the Hasler marathon series race on Sunday at the Eyot Centre on Wargrave Road where 200 paddlers competed in 160 boats.

The Hasler is a series of races hosted by clubs around the country each year and points are awarded to clubs for positions achieved within each racing division from one being the fastest with the most accomplished paddlers that include international competitors to Division 10 for the less experienced paddlers. These points are added up through the series. Races are run in each division for single and double canoes.

Distances raced also vary with Divisions 7 to 10 completing a shorter route of about 6kms which starts at the Eyot Centre, continues downstream through Henley Bridge and turns around Temple Island before heading back again down the regatta course to the Eyot Centre. Divisions 4 and 5 turn at the islands below the Flower Pot pub after portaging through Hambledon lock which is approximatley 14kms and Divisions 1 to 3 cover 17kms.

There was also a highly competitive category for children who raced in single Venture Lightning boats and their course was around the Eyot and Marsh Islands, opposite the centre.

There were 10 children in this race and prizes were awarded for both boys and girls in under 10 and under 12 age groups.

Due to Henley being the organising club, of the home based paddlers who competed, Imogen Street paired up with John Hancock from Wokingham and finished seventh in Division 5 while Carolyn Lewisohn and Tim Nunn came fourth in Division 8.