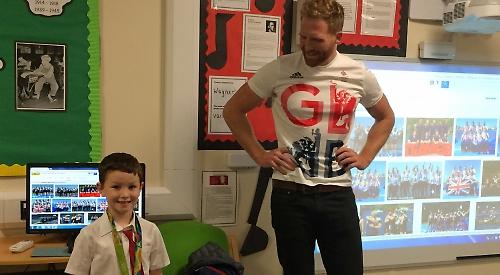 Olympic rowing gold medallist Will Satch took time out from training to visit the Heights Primary School in Caversham. The 27-year-old Leander athlete was invited by six-year-old pupil Samuel Crisford, whose father Tom taught Satch PE when he was a pupil at Shiplake College. Samuel, who finished treatment for a rare form of kidney cancer almost two years ago and is now in full remission, tried on the gold medal that Satch won in Rio with the GB men’s eight. The rower spoke to the whole school in assembly. Samuel said: “I was so excited when Will came to our school. I have been asking my daddy for ages when he would visit and I even sent a video to him asking him to come. The gold medal was awesome. I felt quite nervous wearing it. I hope I can win one, one day! Thank you for coming,Will.” Headteacher Karen Edwards said: “It was so generous of Will to take some time out of his busy schedule in order to gently inspire us all. He was very positive about our school and was impressed by the opportunities for sport we offer. Huge thanks go to the Crisfords, to Will and especially to Samuel for being so persistent with his invitation!”