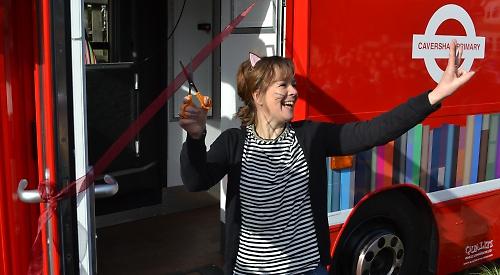 A NEW £32,000 library bus has been officially opened at Caversham Primary School.

The large, red was unveiled in the playground on World Book Day on Thursday last week by award-winning children’s author Tracey Corderoy, who is best known for her Shifty McGifty series of books.

She cut a red ribbon across the doorway and was watched by staff, parents and pupils, who raised most of the money for the bus.

Ms Corderoy said: “This is just amazing and, as I said to the parents, getting something from nothing is an amazing effort these days.

“I’ve opened libraries in schools before but never something like this. Hopefully, it will inspire more schools to try and do a similar thing.”

She said she hoped the bus would encourage the pupils to read more, adding: “Being able to read sets you up for life with the wonderful journeys that stories can take you on.”

The bus will be a fixture, the library in the school building that was lost in September 2014 to make way for a bigger dining area. It will hold about 2,500 books.

Headteacher Ruth Perry said: “Over the past year the school’s association has worked tirelessly to fund-raise in order to make this dream a reality.

“The library will provide a fabulous space to encourage the love of reading, which is such a vital skill.

“Our librarian Emma Barraclough is planning some exciting projects, including reading clubs and parent and child sessions.

“The bus is going to be so well used and will make such a difference. Our huge thanks go to the parents, the Caversham Primary School Association, Bridges estate agents and all the staff for making this happen. It will benefit pupils for many years to come.”

The fund-raising drive was led by Helen Perry and Lucie Lawrence, who co-chair the association.

Mrs Perry added: “We were so excited to take delivery of the bus. The pupils couldn’t wait to board the bus and start choosing their books.

“All the schools in the area are short of cash at the moment and this kind of project would be impossible without parents and the generosity of local businesses.”

• Last month, the school asked parents to contribute almost £190 each, equivalent to £1 per school day, as it is short of money. The headteacher said the school was “struggling” financially because of cuts in the education budget and the money raised by the association was no longer enough to plug the gap.