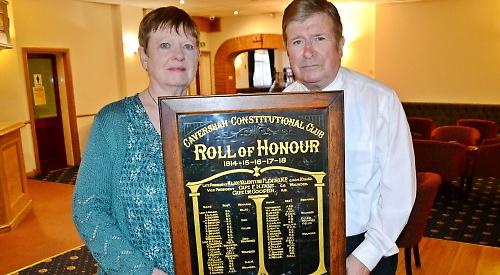 A ROLL of honour commemorating the sacrifice made by a Henley MP and others during the First World War could be donated to the village where he lived.

Major Valentine Fleming, who served the constituency from 1910 until he was killed in action in 1917, is one of several dozen names engraved on the framed board.

It lists every member of the Caversham Conservative Club who fought in the conflict and was displayed at its premises in Gosbrook Road, Caversham, from about 1920 until it folded in 2012.

Now Ron Jewitt, who is the club’s last surviving president, wants to donate the board to the people of Nettlebed as the Fleming family has lived there since the early 20th century.

Maj Fleming’s father Robert Fleming, an eminent merchant banker, bought the Nettlebed Estate in 1903 and commissioned the Grade II listed mansion at Joyce Grove, which is now the Sue Ryder hospice, in 1908.

He also built the village club, off High Street, in 1913 following local outcry over an Act of Parliament which limited public access to his land. His son, a barrister and the father of James Bond author Ian Fleming, grew up at Braziers Park, near Ipsden, where the family lived before Joyce Grove was completed.

He was a friend of Winston Churchill and president of the Conservative Club, then known as Caversham Constitutional Club. At the time, Caversham was part of the Henley constituency.

Maj Fleming joined the Oxfordshire Hussars when war broke out in 1914 and was killed by German bombing near Picardy on May 20, 1917, aged 35. He was posthumously awarded the Distinguished Service Order.

His granddaughters Kate Grimond and Lucy Fleming, who are the daughters of his eldest son Peter, still live in the area and Mrs Grimond’s daughter Rose runs the Nettlebed Creamery.

Mr Jewitt, who is president and chairman of the Caversham branch of the Royal British Legion, was a member of the Conservative Club from 1967 until its closure and was president during the Nineties.

He has been looking after the board at his home in Chiltern Road, Caversham, since the club folded but wants to give it to Maj Fleming’s descendants or the village club’s trustees.

He said: “It seems appropriate that it should go back on display as it is one of the few tangible assets of the club which still remains.

“I didn’t think it should go to Caversham because Maj Fleming was Henley MP.

“It isn’t just about him, however. It’s an honour that he appears on it but there are lots of names on the board, some of whom were killed or wounded in action while others survived.

“It is a real tribute to the people of Caversham and particularly fitting given the fact that Maj Fleming died almost 100 years ago.”

Pauline Palmer, who grew up in Henley and is the branch’s Poppy Appeal organiser, was first to suggest the idea.

She was inspired after reading an article in the Henley Standard about the ongoing campaign to repair the village club’s roof. Last month Mrs Fleming and her husband, fellow actor Simon Williams, raised £4,000 for the cause by hosting a reading of wartime letters between Peter Fleming and his wife Celia Johnson.

Mrs Palmer said: “Nettlebed seemed the most fitting location given the family’s strong connections with the village.

“We considered Caversham library or Henley town hall but those are fairly quiet whereas our Legion branch, among others, used to regularly meet at the village club.

“We would be happy to organise a handover ceremony and think it would make a nice memento for the family or the Nettlebed community.”

Sue Worth, the village club’s treasurer, said she would discuss the idea with the Fleming family and her committee.

She said: “It sounds like a great idea in principle and as far as I’m concerned, if everyone is happy for it to be displayed in the club, then I’m sure we can find space for it.

“We’ve already decided to name one of the two rooms after Valentine Fleming so it would fit very well with that.”