Vandals on rampage at golf club 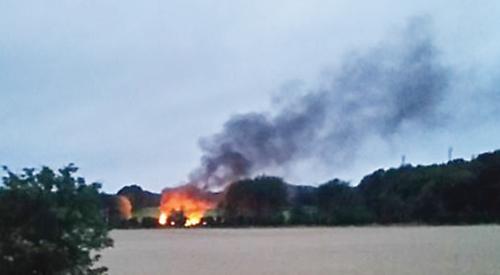 VANDALS went joyriding on stolen golf buggies and then set them on fire, causing damage running into tens of thousands of pounds.

The rampage began at Caversham Heath Golf Club, near Mapledurham, in the early hours of Wednesday.

The gang of joyriders stole three buggies, which they used to smash through a fence to escape the course and then drove about three miles to the skate park at Bishopswood recreation ground in Sonning Common.

There, they used the machines to smash down fencing, destroy benches and rip litter bins from their concrete bases before setting everything on fire.

The blaze was spotted by residents in nearby Orchard Avenue who called the fire service at about 5am.

The police are treating the incident as suspected arson. A fourth buggy was found damaged and abandoned in woodland nearby and two more were left at the club badly damaged. Four football goals were also wrecked.

Sonning Common parish councillor Carole Lewis, who led the project to build the skate park and lives in Woodlands Road, near the facility, said: “I’m absolutely seething. It is just mindless damage.

“This has not been done by skate park users, who were happily using it at 5pm on Tuesday.

“Whoever did this must be off their mind on drugs or alcohol. I don’t know why they thought it a good idea to go from the golf club to the skate park and cause havoc. They are absolute thugs.”

The £100,000 skate park, which was opened in 2015, has been cordoned off by police and will be closed indefinitely while the parish council consults with its contractor Wheelscape about clearing up the mess.

Cllr Lewis said: “We are concerned about the safety and we aren’t sure when we can clear the area. We are waiting for advice.”

The parish council has put up signs around the village encouraging anyone with information to come forward.

All the buggies were stored in a secure area at the golf course, which is on the Mapledurham estate.

Estate manager Robert Wytchard said each of the £4,500 each would have to be written off. The golf club would have to hire temporary replacements and repair damage done to the course.

Mr Wytchard said: “The buggies were smashed out of an area that was reinforced. They drove through our fence and caused serious damage to a couple of the greens.

“They’ve then driven them off site to cause serious damage to the community facility at Bishopswood recreation ground.

“It’s not as if they have taken them to make money to buy something, it’s just mindless damage.

“It impacts on people who are trying to use the golf club for their leisure time and it’s an inconvenience for us.”

Club chairman Andy Tidswell said: “It’s not likely to be a couple of local youths getting exuberant. This is serious and organised vandalism.”

Thames Valley Police appealed for anyone with information to call 101.