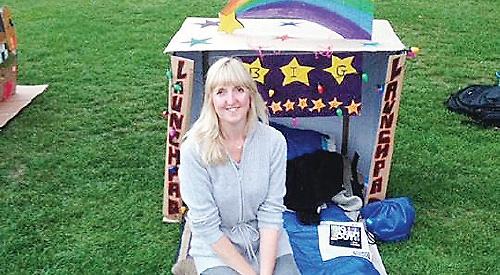 MORE than 120 people helped raise money for the homeless by taking part in the Big Sleep at Queen Anne’s School in Caversham.

The seventh annual event, held during Friday night, was by Reading charity Launchpad, which works to prevent homelessness.

The participants spent the night outside in sleeping bags and cardboard boxes, many of them decorated specially.

They were served soup made by the Shed Café with vegetables grown at the Launchpad allotment by clients.

Musician Davie McGirr busked some lullabies as participants fell asleep. Everyone was awake by 5.30am on Saturday to collect their certificate of achievement. Joy Ferguson, 61, of St Mark’s Road, Henley, who volunteers for the charity, took part with her husband Tim, 57, and daughter Lucia, 24.

Ferguson said: “Launchpad is a fantastic and the need is so great so when the advert came out I thought ‘we can’t do this’. I actually found the amount of stuff we took quite embarrassing as it was stuff a homeless person wouldn’t have. We had a hot meal before we left, we had snacks, we had pillows, we had blankets.

“When we got there there was some interesting debate among the three of us about how we were going to build our shelter but we all got in and snuggled up. We were really lucky with the weather — it was chilly but there was no wind or rain. We slept fairly soundly and they brought us coffee in the morning.

“My daughter and I sat drinking our coffee while my husband dismantled the shelter.

“The whole idea is to raise awareness and money. Between the three of us, we raised about £1,000. Before we’d even gone to sleep we started thinking about who we were going to ask to do it next year.”

He said: “Because I live near Reading I see more and more homeless people and I was thinking maybe I could get involved in helping in some way. I took a few cardboard boxes and made a shelter to sleep in and took some blankets and pillows.

“We had about an hour’s worth of discussions and presentations from people who work for the charity, volunteers and also one guy who had been helped by the charity.

“My highlight was hearing that story and how the charity had helped him out of a bad situation. It was fun, rewarding and educational and I’m definitely going to do it again next year.”

More than £36,000 has been raised so far but Launchpad hopes to hit £40,000 with matching donations from the participants’ employers.