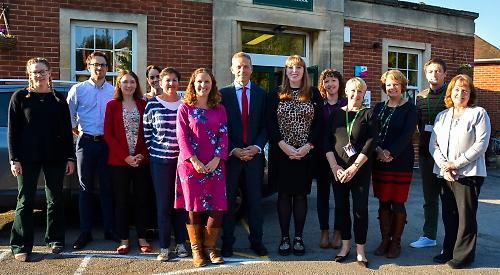 Angela Rayner, who was accompanied by Reading East MP Matt Rodda, spoke with parents, pupils and staff during her visit yesterday and took part in a craft activity as part of its after-school club.

The school in Hemdean Road, which was rated outstanding in its most recent Ofsted report, appealed in February for voluntary donations of £190 per child per year in order to plug funding gaps caused by budget cuts and growing costs.

Mrs Rayner said: "I've been here today with Matt and we've been hearing how parents acros Reading have had to try and dig deep to bring money and investment into our school system. I don't think we should be relying on the charity of parents to ensure every child gets a decent education.

"Labour will fund our education and ensure we have qualified teachers in the classroom so that every child can have a decent education based on their ability to learn, not their parents' ability to pay."

Mr Rodda said: "I'm really pleased that Angela came to Reading to see the effect of the deep cuts forced upon us by the Tory Government.

"At Caversham Primary School, each child is getting £450 less spending on their education, which means less time with teachers, less equipment and less time learning new skills. I think that's wrong."

Last week, education secretary Justine Greening announced that a "fairer" national funding formula will be rolled out in April next year.

This will replace the existing system in which local education authorities like Reading Borough Council or Oxfordshire County Council decide the amounts, resulting in similar schools getting different amounts in different parts of the country.

A provisional version of the formula would have resulted in many of the Henley area's schools losing money but following pressure from Henley MP John Howell and others, Ms Greening confirmed that every school in the country would see an increase.

Head teachers have welcomed the announcement but say they will need more help to meet rising costs.