Pupils grow sunflowers to get in touch with nature 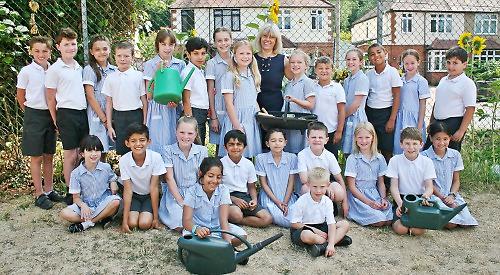 MORE than 100 sunflowers are blooming in the grounds of Hemdean House School in Caversham.

They were given away as seeds back in April as part of the independent school’s Blooms Not Fumes campaign, which aims to plant more flowers in the area to attract pollinators and reduce air pollution from vehicle emissions.

About 500 packs were handed to pupils, neighbouring households and to every shop in Caversham.

Some grew them in their own gardens while others let them germinate before returning them to the school to reach full size. The idea was suggested by Year 4 pupils Monica Morrison, Eva Pierce, Helena Stevenson, Kara Storey-Hind, Tamara Anderton and Emily Fawke, who secretly grew a sunflower behind the school shed in the spring.

They showed it to Helen Illingworth, who teaches Hemdean House’s forest school scheme, then suggested encouraging everyone in the community to do the same. A basket was left outside the school gates in Hemdean Road and passers-by could collect a free packet.

Several dozen of the flowers have been planted along the fence overlooking the main street and Eloise Bateman, who is in reception, grew the tallest one which reached about 6ft.

Helena, nine, of Emmer Green, also received a Blue Peter badge after writing to the makers of the BBC children’s programme to tell them about the scheme.

She said: “I was really, really happy to get my badge and think all the sunflowers look great. We’ve all done really well and I’d definitely like to grow more plants in future.”

Mrs Illingworth said: “It’s been brilliant to get the whole community involved and show them what we’re all about. We’ve been amazed by the response and are really pleased when we see one of our flowers growing in someone’s garden.

“So many people have taken part, from businesses to immediate and extended families, and it’s been great for the children as they’ve learned so much.

“It obviously teaches them core skills like counting and measuring, but just as importantly it teaches them the value of working together as they’ve had to come up with their own watering rota.

“Fewer people have gardens these days, especially with the popularity of patios and decking, so getting children in touch with the natural world is important.”