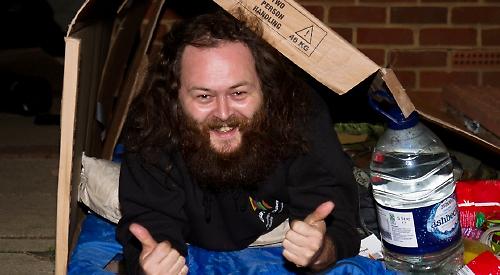 NINETY-FIVE volunteers slept rough in the grounds of Queen Anne's School in Caversham to raise money for charity.

The Big Sleep Out event raised £23,033 for Launchpad, which helps about 400 people per year who are sleeping on the streets or being housed in temporary or unsecure accommodation in Reading.

Participants arrived at the school off Henley Road at 7pm last Friday with sleeping bags and cardboard to build makeshift shelters. They left messages on a model of a bed explaining their reasons for taking part and giving words of encouragement to people who are currently homeless.

They attended a talk given by a young woman previously supported by Launchpad. She had grown up caring for an alcoholic mother and later had to live in a cramped bed-and-breakfast with her young son after fleeing a relationship due to domestic violence.

She is now living in a rented flat for which the charity has provided furniture.

The rough sleepers then had a cup of soup and listened to a busker playing lullabies before attempting to get some sleep. In the morning, each was presented with a certificate.

A spokeswoman for Launchpad said: "With just cardboard and a sleeping bag for comfort, they experienced what it's like to get minimal sleep and be vulnerable to the elements.

"It was a surprisingly cold morning, with many awake at 4am chilly and tired. By 6am, everyone was awake collecting their certificates and having gained a tiny insight into what it's like to sleep rough for just one night.

"They returned to their safe homes and warm beds but sadly for others the reality is very different. We'd like to thank everyone who took part. We raised an overwhelming amount of money."