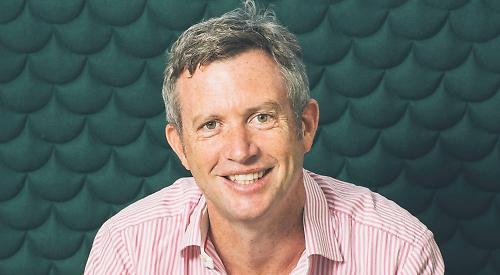 THE founder of an organic baby food company was awarded an OBE in the New Year’s Honours list.

The company, which is based at Greys Green Farm in Rotherfield Greys, is now the biggest baby food brand in the country.

Earlier this year, Mr Lindley stepped away from the business, having sold it to American firm Hain Celestial in 2013.

He was surprised to receive the letter informing him of the honour.

Mr Lindley said: “I got it at the beginning of December and was only half concentrating when I opened it. It was official-looking so I thought it was a tax letter.

“When I started reading it I was taken by surprise as it’s not the sort of thing you get every day.

“You go about life doing what you do and finding somebody has seen that, in this case the Queen, is very motivating.

“A part of this is to do with Ella’s Kitchen and what the team there has achieved so I’m very proud and humbled.

“The other thing I’m very proud of is that it recognises me not only as an entrepreneur but also as a children’s welfare campaigner.”

He also runs The Key Is E, a children’s educational charity in Africa, and has written a best-selling book, Little Wins: The Power of Thinking Like a Toddler, which outlines how behaviour from childhood can increase success in adulthood.

Mr Lindley said: “I’m trying to do good, get laws changed and routines to be better.”

In 2016, he led a campaign urging the Government to place a greater focus on healthy eating in babies and toddlers. A delegation from Ella’s Kitchen visited Westminster with three giant building blocks made of vegetables to highlight their importance in children’s diets.

The group, which included about a dozen children, also delivered a policy paper urging the Department of Health to place greater emphasis on introducing vegetables as soon as possible during a child’s weaning period.

The stunt was part of the company’s Veg For Victory campaign in which it is encouraging parents, retailers and healthcare workers to publicise the benefits of vegetables.

Mr Lindley, who also has a 16-year-old son Patrick with his wife Alison, said he was looking forward to being presented with his medal, having had to keep the news secret.

“I only told my close family but I’m glad it’s out now,” he said. “I’m happy to be on the list with lots of people I look up to. I don’t know when the ceremony will be yet but it will be fabulous whoever and wherever it is.”

Among other local people to be honoured was Jonathan Terry, from Caversham, who founded the Cystinosis Foundation UK in 1999.

He becomes an MBE for his outstanding contribution to the community. Mr Terry is the country’s oldest survivor of the genetic disease, which causes an amino acid called cystine to form crystals in organs, leading to problems including kidney failure and breathing difficulty in older age.

The charity’s trustees congratulated him, saying it was a “fantastic, well-deserved achievement”.

Kirsten Willis was awarded the British Empire Medal for services to the NHS.

She is head of operations for South Central Ambulance Service.

Ms Willis, 46, who grew up in Sonning Common and attended Chiltern Edge School and The Henley College, has worked for the organisation for more than 20 years.

She started working in physiotherapy before training to become a paramedic with the Royal Berkshire Ambulance Trust from 1995.

She has served in a number of management and leadership roles as well as for the NHS 111 service and for the last 13 years has volunteered her time each week to help young people in Reading.

Ms Willis is also chairwoman of the organisation’s LGBT network and deputy chairwoman of the National Ambulance LGBT Network. She now lives in Tilehurst but her parents Bill and Marjorie still live in Sonning Common.

She said: “I’m extremely excited and very proud to receive this award. It’s quite overwhelming at the moment with all the attention.

“I got the letter on November 22 so I’ve had to keep it quiet, which is really nice in some respects as I’ve had a month to get used to it before it was announced.

“I thought I was up for jury service as it was an official letter. I thought, ‘not again!’

“It will be presented by the Lord Lieutenant of Berkshire and I have had a letter from him. I’ve also been invited to a garden party at Buckingham Palace.”

She added: “I love working for the service and remain passionate about us delivering the best possible care we can for our patients.”

Will Hancock, chief executive of South Central Ambulance Service, said: “Kirsten is a very dedicated member of our staff and has shown her tremendous care and concern for the welfare of our colleagues.

“We are delighted that her leadership of the LGBT network has also been recognised and this national award is very well-deserved.”