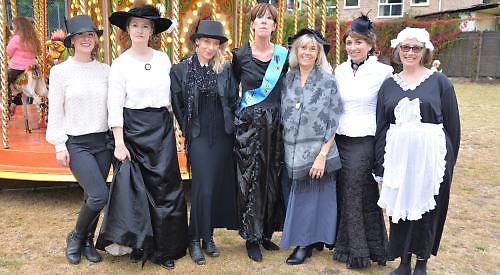 ABOUT 1,000 people attended a Victorian-themed fair to celebrate the 160th anniversary of Hemdean House School in Caversham.

Attractions set up in the school grounds in Hemdean Road included a Victorian carousel, donkey rides, hook-a-duck, lucky dip and a tombola.

Some of the children present took part in a Victorian classroom experience that involved writing on slate. There was also an old-fashioned sweet stall and a barbecue as well as tea and cake.

Visitors, who included parents and current and former students, were invited to paint a tile for a 160-tile mural that will be installed outside one of the school buildings.

At the end of the day headteacher Helen Chalmers cut the commemorative cake, a Victoria sponge, while dressed as Queen Victoria.

Other staff and parents also wore period costume for the occasion. Bec Davidson, head of the school’s parent-teacher association, who organised the fair, said: “The school was set up 160 years ago with the idea of nurturing each individual child, so seeing happy children was the highlight for me — that’s what it’s all about.”

Mrs Chalmers said: “I think it’s essential that we celebrate the past and the future of the school.

“In recent times the school has had its ups and downs but because it’s such a special place it has always come back up.

“The school will continue to be a thriving part of the community. That’s the special school we are.

“The fact we invited all the community made it a real celebration and it felt like there was a good family atmosphere.”

The event raised £2,000, which will be spent on new play equipment and school resources.

About £200 will be donated to Macmilland Cancer Support.

The school was set up in 1859 by Francis Knighton, the owner of Caversham House Academy for Boys.