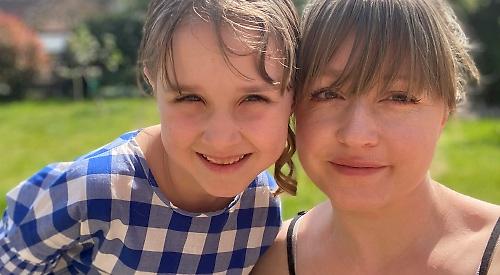 A SEVEN-year-old girl has launched a series of podcasts in which she interviews adults about their jobs.

Gwen Rose, who lives in Caversham Heights, has so far recorded five episodes of Gwen Gets To Work in which she speaks with a fashion lecturer, a television news reporter, a dentist, an artist and a picture framer.

In future weeks she will be interviewing a GP, a police officer, an actress and Harriet Reed-Ryan, who is programme director of the Henley Literary Festival.

Gwen, whose mother Emily runs the Hypergallery art gallery in Market Place, Henley, came up with the idea shortly after the coronavirus lockdown was introduced. The youngster was inspired by the online chats she has with her friends as she cannot play with them in person.

She was helped by her mother, who is also conducting her business online and her stepfather Kwesi Clement, who runs an independent record label so could edit the recordings online in Trinidad, where he is currently stranded as flights have been cancelled due to the pandemic. Gwen conducted her interviews via Skype using a tablet computer and wrote down all her questions in advance.

Her first subject was her aunt Alanna Morgan, who lectures at Plymouth College of Art, followed by a reporter in the British Virgin Islands who is friends with Mr Clement.

She also spoke to a dentist who lives on a houseboat in Amsterdam and used to serve remote overseas communities by sailing out to visit them.

The interviews have been downloaded several hundred times and at one point ranked ninth in Apple’s British podcast charts for children’s education.

Her mother said: “Gwen has always enjoyed watching YouTube and used to record videos of herself making Lego models though we didn’t put them online because we felt she was too young.

“This project started a few weeks ago when she asked me, ‘mummy, how do you start a business online?’

“She sees me doing it and all the online interactions she has been having at school have increased her interest. It was a good idea because her stepdad has plenty of time on his hands and it has given us something to do as a family.

“Her first interview took 90 minutes and she was asking all sorts of questions that adults wouldn’t normally think to ask, like ‘how often do you get paid?’

“She’d never spoken to any of her subjects before but she was very confident. We’re very proud of her taking the initiative.

“Her friends have been listening and giving her praise, which is nice for her — it’s a bit like having your work put up on the board at school.

“Our family say they love it and they’re impressed by how grown-up she sounds. It’s nice to have something to share and talk about.”

Gwen said: “I am very proud of myself. It takes time to do but I get really excited when I start the call and then, well, I just feel really happy when I see the comments people write for me in the reviews.”

However, she is yet to decide her own career path. Her mother said: “She either wants to be an adventurer discovering animals, to be an actress or to go to the moon.”

To listen to the podcasts, visit https://link.chtbl.com/NdiUrRGS