School is recognised for tennis education 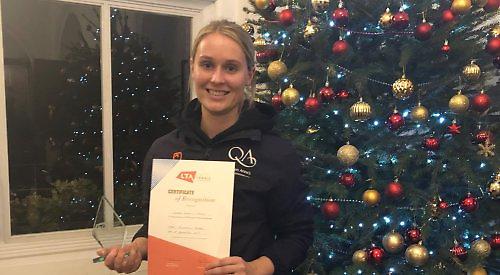 A GIRLS’ school Caversham has received an education award from the Lawn Tennis Association.

Queen Anne’s in Henley Road has been recognised for its work in inspiring hundreds of youngsters to pick up a raquet.

In the past five years, the school has significantly expanded its tennis provision, introducing a tennis performance academy, that allows promising players to train with others of an equal ability.

Rachael Page, 32, assistant director of sport and head of tennis, is delighted to win the award for the central and east region.

She said: “There was an email in my inbox congratulating us — I then did a little dance around my living room to celebrate.

“It’s such a massive achievement for us and really shows that all the hard work we have put into our tennis programme over the last few years has paid off.

“It’s such an honour to be recognised for our tennis provision, both for all we do to increase participation as well as trying to get all our pupils involved in tennis to the more elite end.”

This year, Queen Anne’s qualified for the Aegon Tennis under-13 regional finals for the first time and came away as winners.

Ms Page said: “It was a huge achievement for us and really recognised the hard work that everyone within our coaching programme had put in. When we are allowed back to school it will be fantastic to see all our girls back out on the tennis courts.”

The school joins other regional winners in progressing to the LTA’s national finals. A record 2,100 nominations were received for this year’s awards.

Scott Lloyd, chief executive of the association, said: “These awards acknowledge the extraordinary contribution of the individuals and venues that help us open tennis up, bringing new fans and players to our sport.”

Launched in 2015, the awards acknowledge the thousands of individuals involved in tennis as well as 20,000 schools, 2,700 clubs and more than 9,700 LTA- approved tournaments across the country.