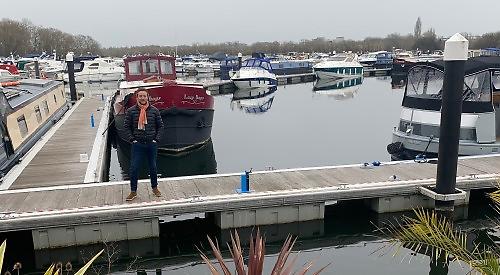 A BOATING firm has bought new moorings at Caversham Lakes.

Hobbs of Henley has completed the purchase of the land at Dreadnought Reach, which was previously owned by businessman David Sherriff, after months of negotiations.

Mr Sherriff, from Medmenham, has kept the rights to the business name so the site will be rebranded as Hobbs Marina Caversham.

It offers 500m of pontoon moorings on land next to the River Thames which, unlike Hobbs’ other locations in Henley and Goring, can accommodate vessels up to 80ft long.

The capacity depends on the size of boats using it but it could take up to 40.

The area is equipped with charging points, which are important because electric boating is becoming more popular.

The facility also has secure parking and could be expanded in future to take “floating” office units as more people are working remotely as a result of the coronavirus pandemic. Hobbs of Henley managing director Jonathan Hobbs bought the land with the proceeds of the sale of the company’s boatyard on the Thames at Wargrave Road, Henley, to vintage boat collector Adam Toop.

He was introduced to Mr Sherriff by Henley estate agent Ballards, which handled the boatyard sale.

Hobbs owns about 150 moorings at its main boatyard in Station Road, Henley, as well as the Thamesfield moorings on the opposite bank and the Red Lion Lawn moorings in Thames Side.

It leases and manages three of Henley Town Council’s moorings in Thames Side, River Terrace and at Mill Meadows.

It also owns 20 moorings at Goring, immediately next to the bridge.

Mr Hobbs said: “The beauty of the Caversham site is being able to accept 80ft boats, which is quite unusual on the Thames.

“It was always our intention to reinvest the proceeds of the Wargrave Road sale into the business and moorings have always been an important part of our model.

“Historically, we’ve provided moorings at numerous locations — Pangbourne, Shiplake, Henley, Goring and Marlow — so this strengthens our position as there does seem to be a trend towards sales of larger ‘wide beam’ barges.

“People buy them to cruise not only on the Thames but on the waterways of Europe and we were getting an increasing number of calls for moorings of that size so there was a real need.

“The location was attractive because there’s great provision for dog walkers nearby and they are allowed on the marina, which isn’t always the case, while the Thames and Kennet Marina next door has a great café and bar.

“We’re looking forward to re-opening after the lockdown and we’ve inherited a number of berth holders from the previous owner. Moorings are hugely in demand and we’ve placed some people from our waiting list at the Caversham site. They’re welcome to come back to Henley later but they’ve welcomed the opportunity to explore further up the Thames.

“We’ve also had a lot of interest from people who want to run businesses from a floating office so we could look into that in future.”

Mr Hobbs said the company had lost income from boat hire and cruises as a result of the pandemic.

He said: “That side of things was severely affected so this was an opportunity to think strategically and while we’re still committed to hospitality, it’s good to have the solidity of this additional income.”

Mr Sherriff, developed the Thames and Kennet Marina and owned it until 2004, when he sold it to its current owner Tingdene Marinas. This followed the creation of the Redgrave Pinsent Rowing Lake, which is the training ground of the GB rowing squad, on an adjoining stretch of water.