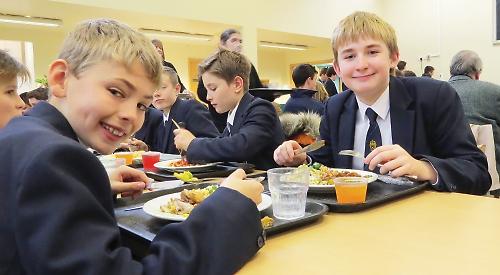 Reading Blue Coat School took part in Cook for Syria, a national fund-raising initiative. Catering manager Suzanne Hemchaoui, who works for Sodexo, organised a special lunch for pupils and staff to raise money for the UNICEF Syrian Disaster Relief Fund. She said: “I think many people are touched by the plight of the people in Syria, so when I read about Cook For Syria on Twitter, I felt it would be a great opportunity to do something to help. The cause resonates particularly with me as my husband had to leave war-torn Lebanon as a four-year-old and, of course, tells tales of how he reached safety in Cyprus where he lived before working in London in the Nineties.” The meal comprised Syrian lentil soup, Manoushi bread, Syrian hummus, Syrian lamb with green beans, Syrian chicken with giant cous cous, tabouleh and fatoush salads followed by Syrian rice pudding with rosewater. Year eight pupils Alex Emery (above left) and Matthew Watkins with the latter saying it was “better than the food at home”! Above right, Mrs Hemchaoui with Sodexo staff Gary Smith (left) and Nuno Barbosa