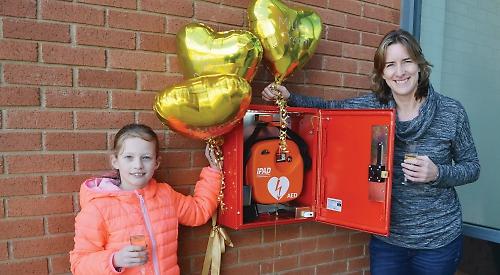 THE Millie’s Dream appeal has now installed 50 defibrillators in less than four years.

The landmark was reached with the unveiling of the latest lifesaving device at the new Townlands Memorial Hospital in Henley on Tuesday.

The ribbon-cutting ceremony was performed by 10-year-old Millie Roberts, who inspired the appeal, and Olympic rowing champion Dame Katherine Grainger, who is a patron.

They were joined by Millie’s mother Sarah Roberts, who founded the charity, and her godmother Geraldine Watkins as well as electrician Dan Scott, who helped connect all 50 defibrillators to a power source.

They toasted the occasion with glasses of sparkling apple juice.

The defibrillator is stored in a red box at the entrance to the hospital in York Road.

It is connected to a power source to keep it at the right temperature and is accessible using a code that is available by calling the emergency services. NHS Property Services, which holds the lease on the £10 million hospital, helped to install the defibrillator at no cost to the appeal after being put in touch with Miss Roberts by the Henley Standard.

Miss Roberts, 47, whose daughter has a heart and lunge condition, originally intended to raise about £15,000 to fund 12 semi-automated defibrillators at schools in the area.

But after donations continued to flood in she decided to expand the appeal to other areas and also install defibrillators at social and sports clubs.

Miss Roberts said: “People laughed when we said we wanted 12 but I think the reason they have taken the dream up with us is because this is something tangible — you can see where your money is going.

“I’m delighted that we have managed to combine the opening of this amazing new hospital in Henley with another Millie’s Dream defibrillator.

“I want to give an enormous thank-you to our patron Dame Katherine Grainger for her amazing contribution to the charity.

“She was there when we started and is still here for the 50th installation. I hope she can join us for he 100th too!

“I also want to thank Dan Scott, our amazing electrician, and Suzanne Stickley, of First Aid Matters. Without them we wouldn’t have been able to install the defibrillators and educate people on how to use them.

“The dream goes on but the money is starting to dry up a little and to maximise a safe outcome we need every school, shopping mall and sports centre to have a device like this.”

Dame Katherine, who is Britain's most decorated female Olympian, said: “I can’t believe it has been three years since we started this campaign.

“The original plan was that if we could get 12 defibrillators it would be a huge success so I can’t believe we have got to 50 — and there’s more to come.

“It started off very small so to grow to this size is just incredible and will have a huge impact on the community. I’m very proud to be associated with it.”

She added: “It’s tragic that people who are otherwise fit and healthy can be affected but having something like this nearby can save lives. I’ve had a 20-year career in sport but you can’t ever take it for granted and this is a constant reminder of that.”

Millie, who is a pupil at the Oratory Prepatory School in Goring Heath, was born with tracheobronchial malacia, a narrowing of her windpipe, and was subsequently diagnosed with paroxysmal atrial tachycardia, an electrical malfunction of the heart which in severe cases may be life-threatening.

After researching the condition, Miss Roberts bought the family an automated external defibrillator to have at home.

But, following the story of footballer Fabrice Muamba suffering a cardiac arrest on the pitch and surviving thanks to a defibrillator, she decided to launch the appeal.

Since then, Millie has had a device implanted in her chest which is connected to the cardiac unit at Great Ormond Street Hospital to monitor her heart activity 24 hours-a-day.

For more information or to make a donation, visit www.facebook.com/
milliesdreamuk