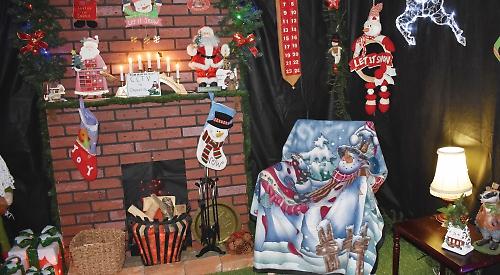 But few, if any, will know the secret behind its success or indeed the identity of Santa’s little helper.

The answer is sales assistant Lynn Burgess, who has worked at the business off Marlow Road for 40 years.

She spends up to a month designing and laying out the visitor
attraction before it opens to the public on the final weekend of November with the help of Henley Lions Club.

Children can then visit Santa every weekend in the run-up to Christmas.

Each visitor pays £6 to enter and in return receives a present, while half the proceeds go to the club to put towards good causes.

The grotto is set up in a greenhouse, which is blacked out with sheets printed with festive scenes.

Santa’s “house” is a simple wooden structure with a pitched roof and cardboard icicles. It’s up to Lynn to bring the area to life. The 57-year-old from Binfield Heath uses stock from the sales floor.

This year’s grotto includes a family of stuffed polar bears — each one costing £600 — frolicking and sledging in the snow as well as reindeer and other woodland creatures gathered around an illuminated Christmas tree.

There is also a wishing well surrounded by decorative penguins from which the proceeds are donated to the Thames Valley Air Ambulance appeal.

An arch has been decorated with imitation creeping plants, gnomes, Christmas trees and hundreds of lights while a life-sized Father Christmas dummy stands at the grotto entrance.

When the festive season is over, the items are put into storage to be reused or sold the following year.

Lynn took charge of the grotto when the centre’s general manager Martyn Sheldrake launched it as a promotional feature about 20 years ago.

It became a more ambitious project when the Lions got involved in 2010 following the closure of the Wyevale garden centre near Shiplake, where their club’s grotto was based.

Lynn says: “I’ve always liked Christmas so I took the opportunity when it came up and it has steadily grown, especially since we’ve been working with the Lions.

“When we go to trade shows in January we’re always looking for one more piece to add.

“Once the structure’s up I’m more or less left to my own devices. I just walk around the centre to see where various things could go and the ideas seem to just pop into my head.

“It’s a nice break from my regular duties and I always look forward to it. I love seeing the finished result as it’s pretty magical and it’s really rewarding to see how children react. Some of them come rushing straight in but many just stop and stare and we even get that from some of the parents.

“It’s nice to have all that effort recognised.”

Mr Sheldrake says: “We rely on our customers throughout the year so this is a nice way of giving something back to them and the community in general.

“We’re getting visitors from further afield because the grotto’s reputation is growing, largely through word of mouth.

“It always looks fantastic and we’re lucky to have Lynn on board to help with it.

“We pretty much just close the door and leave her in there for three or four weeks. We let her do whatever she likes and she always does an incredible job.”