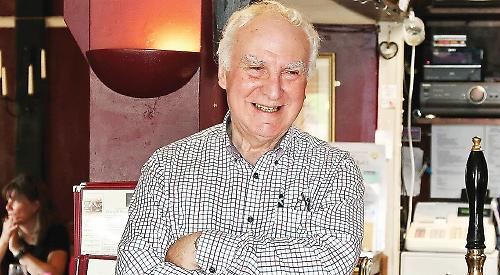 A CHARITY volunteer who leads walks for the visually impaired was awarded a British Empire Medal in the Queen’s New Year Honours.

Alan Futter, 78, of Orwell Close, Caversham Heights, was a trustee of Reading Association for the Blind from 2000 to 2015 when he retired.

He has continued to be the lead volunteer for the charity’s rambling group and every other Monday he recces what route the sight-impaired ramblers will walk the following Monday.

The route has to be carefully planned as sight-impaired walkers need to be able to face the challenge in order to enjoy the walk in safety with the support of volunteers.

Mr Futter has also volunteered for the Chiltern Society and has helped to organise the replacement of stiles with gates in South Oxfordshire, allowing access to the countryside for disabled people.

He said: “I’m very, very pleased but really the pleasure I get is helping the visually impaired and you get such appreciation from them.

“It’s never a chore, you always enjoy doing it. I shall continue to do it for as long as I possibly can.

“My grandson is severely visually impaired and he was born like that. I felt that when he was born I really had to get involved with a charity like this.

“It’s almost like a family — they look forward very much to their walks and you get a terrific spirit with the group.

“The majority of my helpers are from the Henley area — Binfield Heath, Woodcote and Peppard.” Mr Futter, a retired rail operational manager, leads walks primarily in the Chilterns.

Brian Head, of West Street, Henley, who is a member of the rambling group, said: “As a totally blind person, it is an inspiration to take part in walking with such a vibrant group of individuals.”

Marion Haynes, community fund-
raiser for the charity, said: “We cannot thank our volunteers enough for their continued support of the charity. Volunteers are rewarded to see sight-impaired people fulfilling their lives and keeping active.

“Sight impairment can lead to isolation, loneliness and vulnerability and to be able to enjoy the countryside and form friendships is so important.”

• If you are interested in volunteering either with the rambling group or in the Day Centre at Walford Hall in Reading, call Mrs Haynes on 0118 957 2960 or email funder1@raftb.org