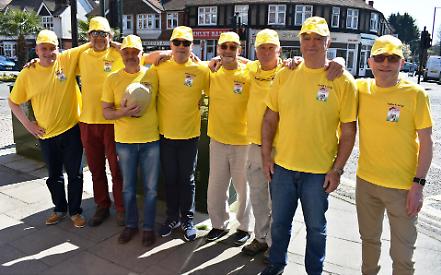 THREE businessmen from the Henley area are to drive 1,484 miles across India for charity.

Chris Pengilly and Steve Belam, from Kingwood, and Kevin Rapson, from Emmer Green, are part of an eight-strong team undertaking the road rally from Chennai to Goa.

The group, who all live in Oxfordshire and Berkshire, will take turns at driving a Hindustan Ambassador, a four-door saloon car that was built in India between 1958 and 2014.

It was one of the nation’s most popular cars and was once described as “virtually indestructible” by presenter Richard Hammond during an episode of Top Gear.

The friends will set off from Chennai, on the country’s eastern coast, on Sunday.

They will follow the southern tip of the Indian coastline, passing through the provinces of Puducherry, Tamil Nadu, Kerala and Karnataka before arriving in Goa, on the west coast, on Wednesday, May 2. The drivers are raising money for StepUp, a charity project in Uganda run by the International Refugee Trust.

The trust aims to help communities to help themselves by educating them about various aspects of physical and mental health as well as democracy and government.

The group is supported by Rabbits Vehicle Hire, of Caversham, of which Mr Rapson is managing director. The company’s fleet has been decorated with stickers promoting the challenge and sponsors who pledge more than £250 can add their name to a Rabbits van which will be displayed at the Oracle shopping centre in Reading after the team has returned. Mr Pengilly, whose team name is Fat Boy Slim, said: “It’s going to be a bumpy ride, at least for us.

“We urge you to donate what you can as all donations go directly to the project.” To follow the men’s progress during the rally, visit www.facebook.com/raceacrossindia or @raceacrossindia on Twitter.

To make a donation, visit www.justgiving.com/raceacrossindia