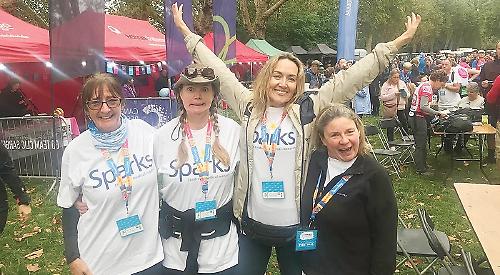 A WOMAN from Henley was the first female home in this year’s 100km Thames Path Challenge.

Anna Troup, 48, finished seventh overall out of 3,000 participants in the endurance race along the river from Putney Bridge to Henley.

She finished in nine hours and 45 minutes and at the line received a trophy, medal,
T-shirt and celebratory glass of fizz.

Mrs Troup, of Lambridge Wood Road, was also the fastest woman when she last took part in the race in 2016.

She decided to enter having trained for the 170km Ultra Trail du Mont Blanc in France in August which she then missed due to illness. The exact same thing happened to her two years ago.

Mrs Troup said: “I thought I needed to do some kind of race to make the most of the training I had done. I had been ill for three weeks.

“I was delighted with my time. I managed to keep with the men for the first marathon [about 42km] but thought I had better slow down. The second 50km was hard.

“The course was slightly different to the last time I did it and my times were only about five minutes apart. I often get really sick when I run an ultra, so I was just delighted to finish.”

Mrs Troup finished more than an hour behind overall winner Paul Nixon, who finished in eight hours and 38 minutes.

However, she was almost an hour and 10 minutes quicker than the second fastest female finisher Alex Marshall. She is an experienced long-distance runner. She and her partner Richard Staite, who are both former rowers, took up the sport in 2013 as it was something they could do together.

This year the couple have taken on the 50-mile Thames Trot from Oxford to Henley, the Ultra Snowdonia 50-mile race and the 83-mile Oner Ultra Run.

“We wanted to go on adventures together and ultra-marathons were something we could do together,” said Mrs Troup.

“We first looked at doing the Ultra Trail du Mont Blanc in 2013 but it took two years to build up enough points from other events to be able to enter.

“We ran races for the first time in 2014 and realised I was getting better so we started racing more.

“We have had a great summer doing events and it’s something an older lady can do quite well.

“A lot of the top runners are women aged over 40. You don’t have to have the speed, you just have to be able to keep going.”

The Thames Path Challenge, which took place over the weekend before last, also offered 50km and 25km races and runners can split the distance over the two days or between members of a team.

Four friends from Henley also completed the 100km race and raised almost £2,000 for Sparks, a charity which funds medical research to improve the lives of children and babies.

Mel Spiers, Jacqueline Alexander, Lesley Spiers and Maria Hayden who called themselves The Sparklers, raised most of the money through the walk but also organised a race night at Henley Town Football Club.

The team walked through the night and finished at Mill Meadows early last Sunday morning.

It was the second time Mrs Hayden had completed the challenge. She first did it in 2015 but was two hours faster this year, finishing in just over 24 hours.