Woman paddles 120km along Thames in five days for charity 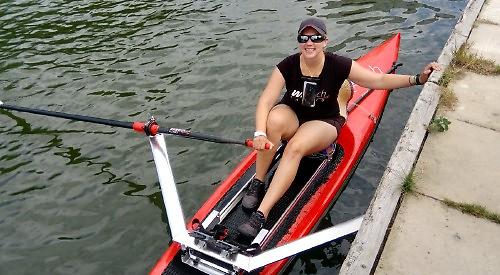 A WOMAN paddled more than 120km in five days along the River Thames for charity.

Amy Karlsson, 35, set off from Lechlade in Gloucestershire on Monday last week and arrived at the pontoon in front of the River & Rowing Museum in Mill Meadows, Henley, at 5pm on Friday.

She used a stand-up paddleboard equipped with a lightweight carbon fibre seat which allowed her to sit down for short breaks while on the water.

So far, she has raised about £2,300 for the Rivertime Boat Trust, which organises river cruises for disabled people in an adapted vessel. This is enough to fund about 11 outings.

She came up with the idea of the paddle as she has regularly rowed, paddled or swum in the Thames since she was a child and wanted to help the trust as she would often wave at the boat and its occupants when it passed.

She had never paddled such a long distance before but managed to remain on the water for up to 10 hours a day and stayed in hostels overnight. She would take enough food with her to last each day. Her diet consisted mainly of carbohydrates like banana, mashed potato and porridge oats for energy and she would drink up to four litres of water a day.

She didn’t have a support crew but her father drove out on a couple of evenings to top up her supplies.

Mrs Karlsson paddled about 30km on each of the first four days, stopping overnight at Rushey Lock near Faringdon, Godstow, Clifton Lock, near Abingdon, and Whitchurch.

Along the way she chatted and gave leaflets to river users, many of whom later donated to her cause.

She was greeted at the finish by a small group of friends and relatives, including the trust’s head skipper Lucy Herbert, who presented her with a bunch of flowers.

Mrs Karlsson said: “I pretty much grew up on the Thames and had my first pair of oars thrust into my hands when I was four so I’ve always wanted to explore and understand it better.

“It’s such a privilege to have spent so much time on the river and I wanted to use that to help other people. The Rivertime Boat Trust is a wonderful charity that helps those with disabilities to get out and see the beauty of that environment, so I really believed in what I was doing.

“There was such a variety of beautiful views beginning at Lechlade, where it’s narrow and full of animals flitting about with their new-borns. It was truly magical being among the bullrushes and so close to nature, seeing big fish leaping out of the water to catch their food.

“As it widened out into the hills of Oxfordshire, there were big open fields and I had cows following me along the riverbank. It was so hot and it was extraordinary to see people jumping off banks and bridges to swim in the river.

“I felt as though I was in the best place for it because I was able to dip my feet in the river or jump in if it got too hot. The weather was very changeable as we had a lot of wind on the penultimate day and it took me twice as long to do the same distance as the previous day.

“There was one very long stretch between Benson and Goring where it got a bit lonely and I wondered what I was doing but for most of the way it was very sociable.

“I had some amazing conversations with people and it was a good way to share the message about Rivertime and get some additional support. I wanted to ensure I finished by the end of Friday so I was really going for it in the last three hours and carried my board past most of the locks, which involved a lot of steps in and out of the water.

“I was very excited to finish as it had been a long journey and I was definitely feeling it but I was so pleased to have done it. My family are very proud of me and can’t believe I did it.

“Once the adrenaline had died down I was pretty tired but after the weekend I was back out swimming in the river.”

The trust, which has almost 50 volunteers, was founded in 2006 and its boat Rivertime was launched at the River & Rowing Museum by actor David Suchet in 2008.

It is based in Henley for most of the year and has taken out about 20,000 disabled passengers from more than 200 other charities and community groups.

She plans to take on a similar challenge next year.