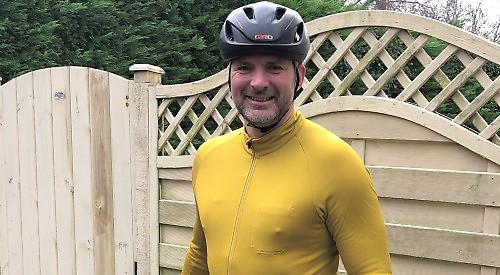 ALMOST 50 cyclists from Henley raised more than £1,000 for charity by taking part in a socially distanced relay race.

The riders were split into teams of four, with each tackling one of four stages of a 40km course through the countryside north of the town.

They all rode at different times and never met in person in order to comply with the second coronavirus lockdown, which ended on Wednsday.

Proceeds raised through entry fees were donated to the Nomad youth and community project based at the d:two centre in Henley, which runs the Henley food bank and has seen an increase in demand since the pandemic took hold in March.

Mark Artherton, who lives in Elizabeth Road with his wife Deborah and daughters Jasmine, Abilene and Eliana, came up with the idea and publicised it through social media.

He is a former governor of Trinity Primary School, which his daughters attended, and in 2017 he arranged a non-stop 24-hour bike ride from Henley to Paris which raised about £40,000 for a new science block.

The 32 participants have stayed in touch ever since and many returned for this challenge and encouraged others to join them.

Also taking part was Jaco Bruwer, a keen cyclist who is Nomad’s youth and family officer.

Mr Artherton, 49, used the Strava fitness app to work out each entrant’s fitness level and matched them with team-mates of roughly similar ability. He used the same app to time them on the day.

The four legs ran from Henley to Pishill via Stonor, from Christmas Common to the A40 near Watlington, from there to Pishill via Howe Hill and then back to Henley.

Mr Artherton entered the second of these, which he completed in about 18 minutes.

He said: “The lockdown was keeping people apart and I wanted to generate a bit of camaraderie among the group while keeping up the social distancing. I only expected 10 or so people to take part, which is why I didn't set up a public fundraising page but the word got around fast and we soon had a much higher number.

“We arranged everything through WhatsApp and there was plenty of competitive banter in the run-up to the day, although people were able to stay apart.

“We knew a lot of families were struggling through the pandemic so when somebody suggested Nomad it seemed appropriate.

“A lot of our riders were at a bit of a loose end because it's hard to organise anything that gets people together and they enjoyed having something to work towards.

“Each time had one rider who was a strong cyclist, another who was fit but hadn't been on a bike in a while and two who were less fit so it balanced out pretty well and was a good excuse to get out there.

“My leg was just 18 minutes of going as fast as I can and putting in a real effort for my team. Each stage had its own challenges, even on the hill going back down to Henley — you still had to pedal as fast as possible to get a good time.

“It would have been nice to have some kind of social occasion afterwards but perhaps we can do that if it becomes a regular event.

“We had some great feedback so hopefully people will want to do it again.

“We've been talking with Nomad and will be handing over the money soon.”

Mr Bruwer, who also cycled the outbound leg from Christmas Common as part of a team called the Shady Mules, said: “Mark did a brilliant job of organising it — it was very professional and the WhatsApp group was fun and lively. He also matched everyone very evenly so it felt fair but competitive.

“I had a lot of fun on the day and enjoyed getting to know my team-mates, who I only met online the week before. It wasn’t too difficult as I had a downhill section and the weather was really good.

“I was very touched that they wanted to support Nomad and the money will really help the work we’re doing, especially with the ongoing impact of coronavirus and Christmas coming up. We’re all very thankful.”