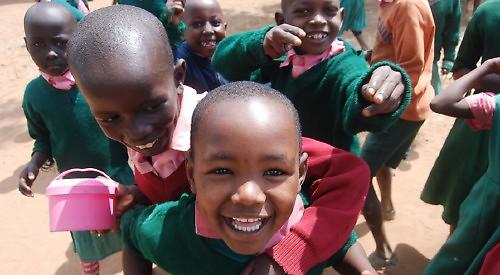 THANK you to those Gap-Africa supporters who answered the call for food aid to our communities in Kenya.

You have been amazingly generous in your support and the reports back from the area confirm this.

You have made a huge difference in lives saved and preventing health issues that would have manifested themselves as a result of starvation.

You have made it possible for Gap-Africa to have enough in the food appeal fund to have a third food distribution day in early January.

Further help will come from our German school partner, Rheingauschule, near Frankfurt. They send their appreciation and love.

This situation will persist as long as covid-19 exists and denies our communities the ability to resume work and thus look after themselves.

Rheingauschule are further supporting our work in the field by continuing with several building projects, particularly with Kisiio Primary School, which suffered so catastrophically in the exceptional flooding of the Athi River a few years ago.

The school was badly damaged and parts of it washed away but no lives were lost.

Kenyan schools work on a calendar year basis. As such, we are preparing the lists for those who wish to sponsor a deserving orphan or poverty-stricken child through their four years of secondary school, starting in January.

Primary education is free but secondary has to be paid for at around £420 per year for four years.

The advantage of seeking work while holding a certificate of secondary education cannot be overstated.

Here is an opportunity to make a real difference in a life that would not have any opportunity otherwise.

A special gathering took place in the central piazza at Kikunduku Primary School on our last day.

All the desks were removed from the classrooms and laid out in the shade of the trees (from our tree nurseries).

The afternoon was given over to a Harambee (or gathering) when the children from various schools came and entertained us with singing and dancing.

Among those present were the Rheingauschule contingent who sat at the desks they had made during their stay.

Gap-Africa is a Henley-based charity that has supported schools in Kenya for more than 20 years. For more information, visit www.gap-africa.org