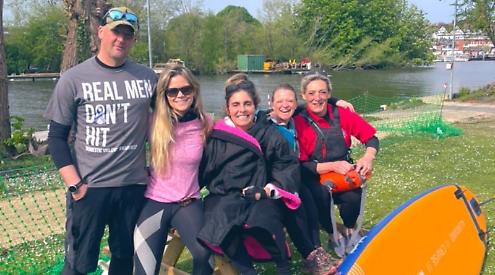 A CAMPAIGNER against child sexual abuse has completed the latest in a year-long series of challenges.

Emma-Jane Taylor, 49, from Henley, paddleboarded the 10 miles from Henley to Marlow on the Thames.

She was trying to raise awareness of Project 90/10, a charity she is setting up to reduce child sex abuse through education, workshops and campaigns.

Ms Taylor, who was supported by members of the Henley Dragons, said: “It was a really windy day. It was a bit like going through treacle and sometimes we were going backwards and round in circles.

“We saw a lot of people on the way and moored up to have lunch with some of them. It took us just under four hours to compete.”

Ms Taylor founded the StageWorks Performing Arts School and NutritiousWorks and also works as a corporate trainer, speaker and mentor.

Project 90/10 is based on her Ted Talk “It’s not just the strangers we should be careful of”, which highlights that most victims of child sexual abuse know their attackers.

“It’s not a conversation people really want to have but we need to help them recognise the reality of it and help bring down the number of crimes. No one wants to frighten people but it’s about having a sensible discussion. It’s about educating children in a helpful way and having language that helps them.

“We just do not do enough safeguarding. There’s a lot of box-ticking going on.”

She has launched a parliamentary petition calling for better funding for the survivors of child sexual abuse.

Ms Taylor said: “There needs to be a greater focus on the victims. I see such devastation every day from the stories of survivors.

“People are struggling with mental health but behind that are the causes such as domestic violence and sexual abuse.

“The focus is on the perpetrators, on things like rehab and treatment, which are important, but we need to support the survivors and there is nothing out there for them.

“Survivors are being held back and we need to let them fly.” The paddleboarding challenge was the eighth of 12 that Ms Taylor has set herself.

She had already completed a virtual swim across the Channel at Phyllis Court Club, run a half marathon and walked a second one in silence to symbolise the silence on the issue of child sexual abuse.

Her remaining challenges include a 100km hike along the Jurassic Coast in Dorset, a 70km circuit of the Isle of Wight and a wing-walk.

Ms Taylor said: “I am absolutely terrified at the thought of the wing-walk but a survivor of child sexual abuse has offered to do it with me.”