Fight to save school goes on 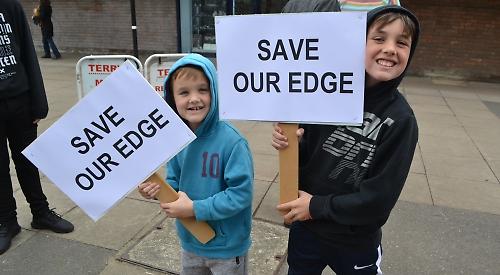 CAMPAIGNERS are keeping up their fight against the potential closure of Chiltern Edge School in Sonning Common.

A fighting fund has been established to pay for leaflets, banners and administrative equipment with any money left over going to the Chiltern Edge School Association.

The secondary school in Reades Lane was placed in special measures last month following an Ofsted inspection in which it was rated “inadequate”.

Oxfordshire County Council, the education authority, is now consulting on possible closure while the regional commissioner is trying to find an academy sponsor for the school.

Gemma Levy, one of the founders of the Save Our Edge campaign, said the money raised would also be used to make the school more attractive to potential sponsors.

“The JustGiving page raised more than £700 in 12 hours,” she said. “We want to use it for improvements to the school.

“We want to clean the windows and make the whole site aesthetically pleasing to help with potential sponsors. The money will help because at the moment we are relying on freebies and people doing bits for us.”

The school is to hold a parents’ support day on June 2 from 9.30am to This is to help tidy up the site, including gardening, window cleaning and path clearing.

Meanwhile, more than 2,200 people have now signed a petition calling for the school to be kept open.

Volunteers have been leafleting in Kidmore End, Caversham, Peppard, Emmer Green and Sonning Common, which its catchment area.

On Saturday, campaigners wearing Save Our Edge T-shirts and carrying placards gathered in St Martin’s Precinct in Caversham to protest at the potential closure.

Among them was Gemma Chandler, a former Chiltern Edge pupil from Stoke Row, whose eldest son Ewan is in year 11.

She said: “We want the school to stay open — it’s a good school and nice and small. I used to work with some of the kids at Bishopswood and there isn’t any other special needs provision in South Oxfordshire. I’d be heartbroken if it shut as it would be a ridiculous waste of resources to have children travelling miles to other schools that are already full. They are building more properties in and around Sonning Common so there is a need for the school.”

Kate Clements, from Caversham, whose son Jack is in year eight, said: “It has been a huge resource for 60 years for this whole area, not just Sonning Common. My son feels very safe and valued there.

“This is about future generations of children who will have no choice about where they go to school.

“Closure would be devastating for my son and have a huge impact on future children in this area.”

Dave Robinson, from Caversham Park, retired from the school last year after 30 years as a history teacher and his daughters Julia and Sally both attended the school.

He said: “I’m against the closure of Chiltern Edge because it has the capacity to improve. With new leadership and an academy sponsor, we can move forward.

“It’s not just the 2,039 people who have signed the online petition, it’s the hundreds supporting the campaign, including Reading East MP Rob Wilson and Henley MP John Howell. The closure of this school would have disastrous effects.”

Speaking at a Sonning Common Parish Council meeting on Monday, Mr Howell said he and Mr Wilson had been working to help find an academy sponsor.

He said: “We have had words with the Secretary of State to let her know what is going on. We have also begun conversations with academy sponsors to take over the school.

“Rob Wilson and I have received an email from Ian Hudspeth, the leader of the county council, to confirm they are keen to find an academy sponsor for the school and are working hard on that.

“Closure is the last thing we want to see happen. They are prepared to work with Rob and to make sure the school is saved and continues to provide education the village wants and, more importantly, the parents want.”

County councillor David Bartholomew said he understood that the regional commissioner was unlikely to speak on the issue until after the general election on June 8.

The parish council agreed to do everything it can to help the school remain open.

Councillor Barry Greenwood said: “When my children went to the school the roll was 1,100 or 1,200. They got a first rate education.

“It is vital for the education of existing children and those who will join from the village, Caversham and Emmer Green that the school stays open. It’s important for the whole community of Sonning Common.”

The county council says this will allow more time to consider responses.

Lucy Butler, the county council’s director for children’s services, said: “We feel this extension will help reach the best possible outcome for children’s education and serve to reassure families. We would encourage everyone with an interest in the provision of good quality education for children in the local area to take part in the consultation.”

To register to help at the parents’ support day, email office@chilternedge.oxon.sch.uk

Volunteers are asked to say whether they would prefer to help in the morning (9.30am to noon) or afternoon (12.30pm to ). People are asked to bring appropriate clothing and equipment.

There will be another protest outside Sonning Common village hall at tomorrow (Saturday) where volunteers will be speaking about the campaign.

• The school will hold a Great Get Together on June 16 from to as part of a series of events nationwide inspired by murdered MP Jo Cox.