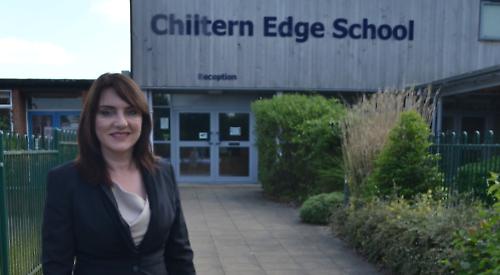 SWEEPING changes are being made at a secondary school in a bid to prevent it from closure.

Moira Green, who became headteacher at Chiltern Edge in Sonning Common last week, is planning to extend teaching hours and smarten up the uniform.

She has also cancelled a camping trip for year 7 pupils so staff could spend more time on site at the school while they work to improve standards.

The announcements were made to parents during a series of meetings last week and comes after the school was placed in special measures in April after an Ofsted inspection ruled that the Reades Lane school was “inadequate”.

Oxfordshire County Council, the education authority, is now consulting on possible closure while the regional schools commissioner is trying to find an academy sponsor for the school.

Miss Green, who started on Monday last week, wants the new uniform so it will make students look more business-like. This will include a blazer with shirt, tie and skirt or trousers.

There will also be rules on smart shoes and skirt length. Currently students wear polo shirts and sweatshirts.

Miss Green says the school day on Wednesdays, which currently finishes early at 2.10pm, will run until 3.10pm.

Both initiatives will begin in September when teachers will increase their teaching hours from 24 hours a week to 25.

Miss Green cancelled the year 7 camping trip, which was due to take place on Monday, and pupils will have a normal school day instead.

Later in the week they will complete the other planned activities, which include bell boating and visits to Dinton Pastures and Dorchester Abbey.

The pupils will camp for one night on the school field on Wednesday and on Friday, external groups, such as Amnesty International, will come into the school to speak about their work.

Parents will be partially refunded for the camp and the current year 7 pupils will instead go on a camp in June next year.

Campaigner Gemma Levy, who founded the Save Our Edge campaign, said that, on the whole, parents were pleased with the changes.

She said: “Some people have said about more money being spent on uniform but we were told it could all be generic, meaning you can buy it from Asda or Tesco.

“If you look at it in the long term, we were buying two or three blue polo shirts for the week, at about £10 each.

“We were told she tested it and bought a whole uniform, including a shirt for every day, from Asda for £33. I don’t think that’s beyond anyone.

“In terms of the camping trip people were disappointed but it was explained well enough. At the end of the day there won’t be a school if she can’t do what she needs to do. She said she was going to have to make some decisions which people are not going to like but that is what she is going to do and we have to support her.

“The extra hour at school makes no difference to us. The kids are saying ‘oh no’ but they are getting more of an education, which is what we want for our children.”

Miss Green has confirmed to parents that the school’s budget and in-year deficit, believed to be about £300,000, had been addressed and said it would have a balanced budget for the next school year.

A new behaviour policy is currently being drafted and, when it is implemented, she warned that there will be zero tolerance towards bad behaviour.

Miss Green has also announced her plan to implement a “two-tier” education standards system. This will see consultant teachers brought in to the school to raise standards and will be followed by hiring staff long term to continue the levels that have been set.

Meanwhile, campaigners are planning to meet with new Reading East MP Matt Rodda at the end of this week to discuss the school.

A group also plans to attend the county council cabinet meeting at County Hall, in Oxford, on July 18 when the decision on the school’s future will be announced.