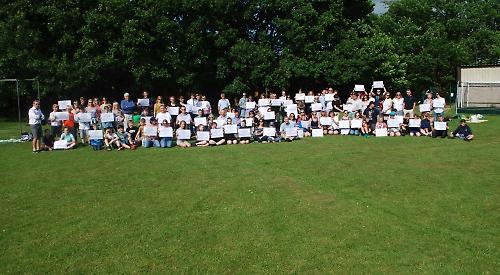 ABOUT 80 people attended a community picnic at a closure-threatened school.

The gathering at Chiltern Edge School in Sonning Common was part of the Great Get Together, a series of events held across the country in memory of murdered MP Jo Cox.

The secondary school was placed in special measures in April after being rated “inadequate” by Ofsted and Oxfordshire County Council, the education authority, is now consulting on possible closure.

The picnic was organised for June 16 as that was the original date for the end of the consultation before being put back to June 30.

Staff, parents, pupils and Save Our Edge campaigners all enjoyed food and drink on the school field. The event was attended by Henley MP John Howell and new Reading East MP Matt Rodda who talked to interim headteacher Moira Green, who was brought in to run the school following the Ofsted report.

Vicki Matthews, the headteacher’s personal assistant who organised the picnic, said: “We have been absolutely overwhelmed by the community support for the school since the consultation was announced.

“The event was on the day when the consultation should have finished so it was a nice way for everyone to come together and reflect.

“As Jo Cox said, we have more in common than divides us and there is nothing better than a picnic.”

Pupils Archie Muncer, James Blackall and Evie Warner Starr were working with Tom Zajal and Clive Robinson, of Real Time Video, on making a film about the issue. The students interviewed campaigners on camera.

The decision on closure will now be made on July 18. In the meantime, the regional schools commissioner is trying to find an academy sponsor for the school.

Campaigners will be outside Sonning Common village hall tomorrow (Saturday) from 11am to noon with copies of the consultation form for people to fill in.

A public meeting will take place at the school on Tuesday from 7.30pm. All parents and members of the community are welcome to attend.

About 20 people attended a public meeting on the future of the school organised by Sonning Common Parish Council on Wednesday last week. Miss Green was among the speakers.