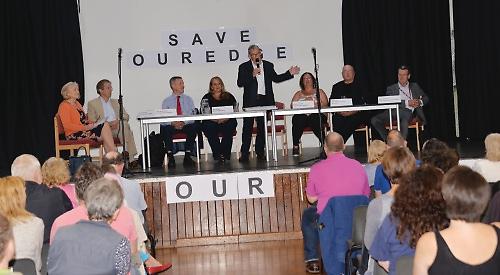 A SCHOOL threatened with closure has been given a possible lifeline.

The Maiden Erlegh Trust, which runs two academies in east Reading, has expressed an interest in sponsoring Chiltern Edge School in Sonning Common.

The secondary has been placed in special measures after being judged to be “inadequate” by the education watchdog Ofsted. Oxfordshire County Council, the education authority, has been consulting on possible closure.

The trust is in talks with council officials about the Reades Lane school becoming an academy after being alerted by former Reading East MP Rob Wilson.

Councillor Hilary Hibbert Biles, the council’s cabinet member for education, said it was one of two possible sponsors but the other one was a “non-runner”.

Speaking at a meeting at the school on Tuesday attended by about 100 people, she said: “The county council is currently in early discussions with the regional schools commissioner to find an academy sponsor. That is the Maiden Erlegh Trust.

“The headteacher Moira Green has been over there and I hope this will come to fruition.”

The consultation closes today (Friday) and a decision on closure will be made by the council’s cabinet on July 18.

Councillor Hibbert-Biles said: “I’ve read all the reports and all the letters from parents, grandparents, previous and current teachers and some pupils. This is not a formal consultation, this is a fact-gathering consultation and I believe we have gathered all the facts.

“On July 18, I will not be recommending we go forward with formal consultation on closure but it’s not just down to me, it’s a cabinet decision.

“I want to give the school the opportunity of a sponsor coming in to make the school an academy. I know how special this school is to everybody. I came to see the new headteacher on her first day and asked her if the school could be turned around and how long it would take.

“I was told it could be turned round and it would take one year. I asked if she could balance the budget and was told she could and had done it before.”

Miss Green, who became interim head on June 5, said: “The county council is working with me on a support package for training and development of staff.

“Some of that is about external quality assurance. If we say we are making a certain amount of progress, they measure it themselves, then report back to the county council and the school’s interim executive board.

“When they come in they will be wanting to see improvements from the first 10 weeks. I know what the changes should look like.”

Matt Rodda, the new MP for Reading East, said: “I know Moira Green and her team are working hard.”

He has tabled an Early Day Motion in Parliament on the issue.