Head praised as school is saved 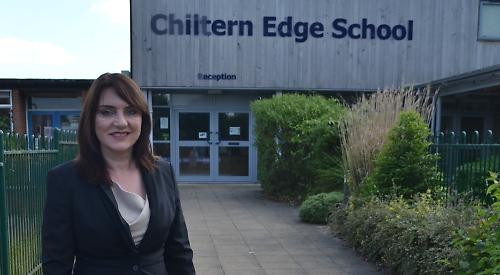 new headteacher of Chiltern Edge School has been praised as it was confirmed the secondary will not close.

Moira Green was heralded by members of Oxfordshire County Council’s cabinet at a meeting on Tuesday as they agreed unanimously agreed not to go ahead with a formal closure notice.

Miss Green was appointed in June, two months after the Sonning Common school was placed in special measures following an Ofsted report that rated it “inadequate”.

Last week, the school was praised in separate reports by Ofsted and an independent inspector commissioned by the county council as the education authority.

Both said students’ performance and the leadership of the school had improved.

She said: “In considering the recommendation I remind you there are 450 children, and 91 in year 11 dealing with GCSE exams, living in an uncertain situation with their educational future. I speak on behalf of them to ask you to take away that uncertainty. The teacher shortage nationally has been well-publicised and the threat of closure inhibits the appointment of the best staff for the school.

“It also affects parents’ choices when choosing a school and, as you know, pupil numbers are crucial to school funding. I know there is still a great deal to do and top of my list is making sure there is great teaching in schools, which leads to excellent outcomes for students.”

Miss Green said discussions about the school becoming an academy were being held with Maiden Erlegh Trust, a multi-academy trust based in Wokingham.

Dave Robinson, a former teacher and parent at the school, spoke on behalf of the Save Our Edge campaign group, which was set up when the school was threatened with closure.

Mr Robinson, who worked at the school for more than 30 years, said problems identified by Ofsted, including poor progress by pupils in the core subjects, lack of support for disadvantaged pupils and poor senior leadership, were being addressed.

“I attended the school’s presentation evening last week and it was a occasion,” he said. “Those students performed despite the difficulties and instability of the school. The results were better than the national average. It was a great achievement for those pupils.

“The improvements being made at the school are recognised by the parent bodies, which are behind the students, staff and Miss Green.”

Councillor Hilary Hibbert-Biles, member for education, said: “Moira Green has done fantastic work with the pupils. She has installed a new uniform that looks wonderful but, more importantly, students like to wear it and want to wear it.

“I feel the school is improving and that pupils and staff need to work and study in an environment when uncertainty has been taken away.

“There has been upheaval. I want the school to move forward strongly.”

She also praised the Save Our Edge campaign, saying: “The parents have done a wonderful job for the children at Chiltern Edge.

“They grasped this with both hands and ran with it. I hope they continue as a strong body to support the school. They have done a great job.”

Councillor David Bartholomew, whose ward includes Sonning Common, told Miss Green: “The well of concern for the school that came to me as the local member was extraordinary.

“The sentiments expressed by pupils and parents were most unusual. I just want to say thank-you to you for what you have done in a short space of time.”

Lucy Butler, director of children’s services at the council, recommended the closure threat was removed.

She “I think we need to take the uncertainty away for pupils, families and the community.”

Speaking after the meeting Green said: “I am thrilled for all the students, parents and staff who have worked tirelessly to get us to this position. There is still work to be done and we are committed to doing that. It has been a tremendous team effort to get to this place.”