Traders upset at being left out of festival 'food court' 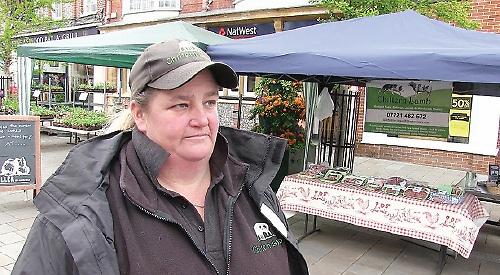 VISITING traders have been given preference over local food producers at the Christmas festival in Henley tonight (Friday), it has been claimed.

The town council, which organises the annual event, appointed a Reading company to organise the “street food court” that will be in Bell Street.

Glen Dining, who runs Blue Collar Street Food, has given pitches to 28 traders but at least half of these are not local.

Among those left disappointed was Tracey Betteridge, who runs Chiltern Lamb, which is based in Fawley and Skirmett, and wanted to sell her meat.

Miss Betteridge did not have a stall at last year’s festival as she lost money the previous year but was upset when she was not asked to take a pitch this year.

She said: “Had I known they were not going to do the predicted bun fight of the multitude of food stalls I would have beaten the door down to be there. The council knows me well as I do the farmers’ markets, so why did I not get asked along with some others?”

Mr Dining said he did not receive an application from Miss Betteridge but she said she only found out last week that the organisation of the food area had been outsourced by which time it was too late.

Miss Betteridge added that the trend for more traders who were not local had grown over the past five years.

Mike Rogers, of Lovell Close, Henley, hoped to have his fish and chip van at the event but was told no more hot food stalls were needed.

Mr Rogers, who launched Stovell’s Fish Suppers, in 2015 and visits Shiplake, Hurley and Stoke Row every week, was told that instead he could bring his ice cream tricycle.

He said: “In an ideal world I would like to be able to run both my businesses, which are professional, fully staffed and local.

“In all honesty, I am happy with the pitch I have been given. I only question it because I heard about it late on. I think there needs to be some fine tuning and local traders need to be given first option.”

Mr Rogers also expressed concern about a rise in cost of pitch from £60 to £95. Lady McAlpine, of Fawley Hill, has taken up the cause of the traders.

She said: “Were this a normal commercial event, neither I nor those who are horrified by this would complain. It is not.

“As with Henley Show, it is supposed to be supporting suppliers, growers, traders. It is not about the organisers making a profit.

“If a small local provider has to pay a ‘middle man’ they won’t make enough to make it worth their while.

“Clearly there is nothing to be done about this year’s event but I do hope those responsible will take heed of this and put in place rather more tactful arrangements for next year — or any other community event they organise.

“Local suppliers can be booked now for next year. I have all mine booked for the next two big events at Fawley Hill and the Traditional Boat Festival in Henley and have a couple of emails a day from caterers wanting to come in.”

Mr Dining, who also ran a street food festival in Henley in May, said the only local traders to have been turned away were those who applied too late or would not match the “agreed aesthetic”.

He said: “The council said that in previous years they had complaints from the public due to there not being enough variety with the food on offer.

“I said ‘yes’ and my aim was to improve the quality and variation and, as much as possible, use good, local traders. I would say about 50 per cent of the traders are local.

“I did as much as I could to get them in and there some very good ones in there. The problem I have got is my job was to improve the quality and variation. I tried to have as many local traders as possible while at the same time offer varied and quality food.”

His choice of traders was approved by town councillors a few weeks ago.

Mayor Kellie Hinton said: “Last year we had several complaints about food stalls everywhere so this year we decided to zone the festival.

“There are local people taking part. Off the top of my head, I know Spice Merchant and Henley Gelato are involved. Blue Collar is helping to provide stalls that we can't source in Henley, such as roasted chestnuts, to work alongside local providers.

“Blue Collar is also ensuring all stalls look festive and are not just a load of burger vans — another complaint we had last year.”