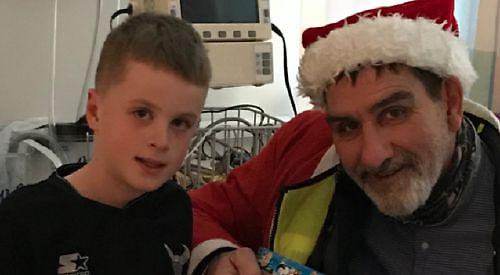 A GROUP of Henley residents delivered presents to sick children who will spend Christmas in hospital.

They were accompanied by a Tesco delivery van full of donated goods including colouring pens and pencils, games, activity books and art and craft materials as well as nappies, bibs, socks and baby toiletries. The convoy also included family and friends who went by car.

When the group arrived, nurses took charge of the bags of toiletries and some of the presents went to the communal play area while the visitors went round the ward handing out the rest to the children. Mr Eggleton said: “The children were over the moon to see us. It was one boy’s birthday so we gave him double the amount of gifts and he was very excited. I love doing this because you can see the smile on the children’s faces.

“They don’t think anyone is going to come in and see them apart from their parents so they’re happy when someone comes in to give them gifts.”

The toy run is organised by Mr Eggleton and Paula Isaac, who founded the residents’ association together. Mr Eggleton travelled to Oxford on his Triumph Bonneville America motorcycle and was joined there by his daughters Lily, 13, and Daisy, 10.

Mrs Isaac, of Gainsborough Road, said: “The hospital was pleased with the donations and we were able to take the gifts to the children. We managed to fill three big supermarket trollies when we got there. We’re grateful to everyone who has been so generous in supporting us.”

Councillor Hillier said they were introduced to the nurses who would be working on Christmas Day and gave them treats.

• Carol singing will take place on the green in Gainsborough Crescent on Wednesday from 5.45pm. There will be hot chocolate and mince pies available. All are welcome. The event has been organised by Sue Prior, of the Nomad youth and community project, based at the d:two centre.