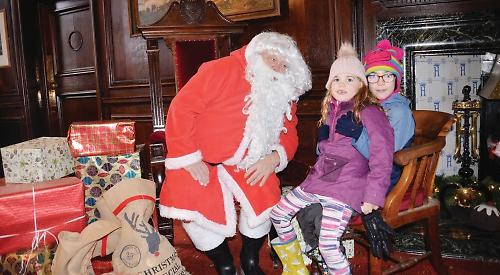 SNOW ruined the festive shopping event in Henley on Sunday.

The festival, now in its second year, is designed to increase footfall in the town centre and boost trade for the retailers.

However, few shoppers braved the cold and the icy pavements following the snowfall during the early hours of Sunday which continued during the morning.

Some shops were unable to open while others were hit by staff being unable to travel to work.

Among those that remained closed were Paperchase and WH Smith in Bell Street and Joules in Market Place,

Wooden cabins which had been ordered for the stalls in Market Place failed to arrived after the lorry carrying them got stuck in the snow on the M40.

As a result, the stallholders had to be moved into the town hall, where a Santa’s grotto was set up. An “alpine” slope for children to slide down in rubber tubes was set up in Market Place as planned after the town council cleared the area of snow and put down salt.

Town manager Helen Barnett was disappointed but said that people who did still come enjoyed themselves. She said: “We had almost 200 people in to see Santa and children took advantage of the River & Rowing Museum doing arts and crafts.

“From a retail point of view, it was disappointing. I think some shops had better days than others depending on what they were selling.

“It was unavoidable and a shame with all the effort that had gone into planning the event.

“We will review all the Christmas events at a wash-up meeting in the new year. Maybe we will have two dates next year.

“We will be making sure we are doing the right things for Henley and our retailers as well as making it fun for the people of Henley.”

She said: “Helen should be congratulated on her efforts.

“When I woke up the first thing I did was call her to see what was happening and she was already there and had managed to get to town through the countryside.

“The weather was obviously terrible but nothing could be done about that. It was still a good event. The alpine slope and grotto were brilliant and people were still having a lot of fun. Children got to go and see Santa and he was able to give out presents and people were still able to spend money in the shops, which is what it is all about.

“I spoke with staff in Temptation gifts and they told me they had a good day’s trade.”

Laura Loveridge, manager at the Temptations gift shop in Bell Street, said: “We were fairly busy considering the circumstances. We found it was mostly local people and nobody was visiting Henley.”

She said: “It was incredibly quiet. We probably only had five customers through the day, which was a shame but it was fun to dress up and do the reading.”

John Thirlway, general manager of Strada restaurant in Bell Street, said: “We were very low on our predicted trade for the day.

“I think a lot of people opted to go and play in the snow.”