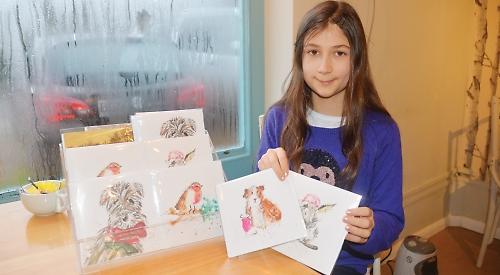 A GIRL from Stoke Row is thrilled that her home-made Christmas cards are on sale in the village shop.

The cards were inspired by her love of animals and the four designs feature a rabbit with a Christmas hat on, a guinea pig with a present, a schnauzer dog with a wrapped bone and a robin. Each card costs £2.

Hazel, who lives with her parents Sarah and Andrew in Benares Grove, said: “I was doing some paintings and my grandma said, ‘wouldn’t it be good to get them turned into cards?’ so that she could send them to her friends.

“I chose the bunny because I love rabbits, the robin is there because there’s a little robin that comes to our garden a lot, the guinea pig because we have two guinea pigs and my friend has a schnauzer.”

Hazel, who attends Stoke Row Primary School, completed the paintings in her half-term holiday in October.

She said: “I’ve just started doing watercolours in a certain style and I wanted to make the cards in the same style. I’ve done flicks of the paintbrush so there’s spray on them.

“I used mainly grey, black, white and brown because of the animals and the reds are Christmassy.

“I enjoyed designing them. One or two of them I had to start again but the others were good the first time.

“My friends and family all think it’s really good that the cards are on sale. Quite a few people who work at the school have bought them and so have a lot of friends.

“It’s good because lots of people will see my artwork. I like to make people smile. I’m very happy and feel very proud of myself.” She sold some cards at the school’s Christmas fair on Friday to raise money for art supplies and now plans to design a set of spring cards.

She has also had a request from Mrs Steiger to design a card featuring the village’s famous Maharajah’s Well, which was built in 1864.

Hazel said: “I’d quite like to be an artist and keep selling cards. I’ve been interested in art for quite a few years. I like it because it’s creative, you don’t need a lot of stuff to do it and it’s quite relaxing. I do a lot of other things like sewing and knitting.”

Mrs Joyce, 42, who is studying to be a gardener, and her husband, an engineer, are very proud of Hazel.

She said: “The cards are very much her — I can really see her personality in them.

“We haven’t put her age on them so they’re really being sold as they are. I was talking about a lady who works at the school and she said, ‘I bought one the other day and didn’t realise it was Hazel’s’, which was so lovely. Hazel’s always making something, she’s very creative. we have made to send to various people at Christmas.

“She has just used books to learn some of the artistic techniques and develop her own style from that. She has got a little area upstairs where she does all her artwork.

“It’s amazing that she has done this off her own back. It has been a very useful experience for her to have to set your price and work out how much profit you’re going to make.”

“The response from the village has been phenomenal and the first lot sold out within less than a week so we had to restock.

“They are right up to standard with the rest of the cards we have and they are absolutely charming.”

She added: “The real schnauzer comes into the shop every Friday with his owners!”