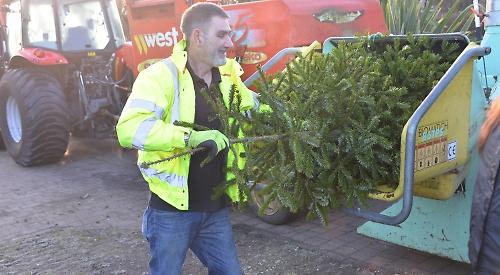 MORE than £180 was raised for Henley in Bloom by the Christmas tree shredding service.

Dozens of residents took their trees to Mill Meadows on Saturday to be shredded by Henley Town Council’s parks services staff using a mechanical chipper.

Mayor Kellie Hinton and her escort, Councillor David Eggleton, lent a hand. Residents paid £2 each to have a tree shredded, or £5 if they wanted it collected from their home.

In return they could have a bag of chippings to use in their gardens. The rest went on the council’s compost heap.

Councillor Hinton said: “This year we made a bit more money by collecting more trees than normal so special thanks to Cllr Eggleton for going out and collecting them. This is the kind of thing that keeps Henley in Bloom running, along with all the business and community support.”

The council’s Henley in Bloom and civic pride sub-committee will consider how to spend the money.

The chipping service began five years ago and was the idea of the council’s parks manager Gareth Bartle.