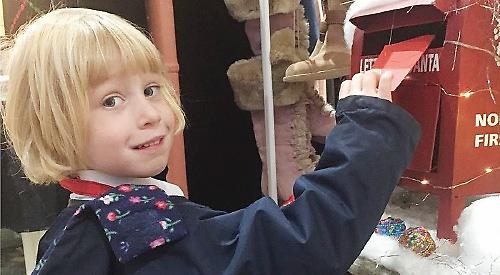 ADA, five, was the first person to post a “letter of hope” in a new pop-up Santa’s letterbox in Caversham.

The Heights Primary School pupil hopes other children will follow her lead by posting letters outlining what they would like to see done to help make the world a better place.

The letters will be collected by Santa during a special late-night community Christmas extravaganza in Caversham on Friday, December 7 from 5pm to 8.30pm.

The shops will be open late and offering seasonal discounts and there will be a farmers’ market, carol singers, entertainers, buskers, festive food and fun and games.

Jude Chapman, vice-chairwoman of Caversham Traders Association, said: “We are having a ‘reverse Santa’ visiting our festive grotto in the precinct. Children will be bringing gifts to give him which he will then donate to a local charity.

“To link into this giving theme, we thought it would be a good idea to ask the children to drop Santa a letter which doesn’t list all the presents they want to find under the Christmas tree but instead lists all the things they would like to see done to make the world a better place and also all the good deeds they plan to do themselves. We plan to put these letters on display in Caversham.”

The post box is inside the Caversham Emporium, a vintage shop in the precinct.