Come and have a ball at Henley Town Football Club 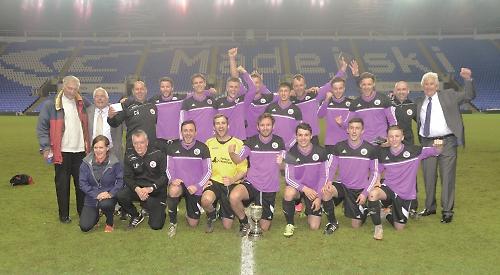 HENLEY Town FC was founded in November 1871 and is the oldest club recognised by the Oxfordshire Football Association.

Henley Town played in the early days of the FA Cup and were full members of the Football Association for several seasons.

In 1912-13, they won the Reading Temperance League’s top division and were runners-up the following season. Today’s Henley Town Football Club — aka the Red Kites — recently won the Reading Senior Cup club challenge cup at the Madejski Stadium by beating Hellenic premiership side Binfield 5-3 in the final.

This is the first time we have won this trophy since 1871. We were also promoted from Hellenic League Division 1 East to the premiership, having increased our stand size sufficiently to qualify to the higher league.

Following a successful 2015-16 season, Henley Town recently held their presentation evening. This year’s awards went to Ben Clark who was voted the players’ player of the season for his hard work and the 15 goals he scored.

Club captain Richard Thomas was awarded manager’s player of the season following his solid performances and leadership skills shown throughout the campaign.

But for those interested in getting involved, there are plenty of other opportunities to shine at the club — we are looking for senior footballers, with trials currently available. Social and supporters’ memberships are also on offer and our clubhouse is available to hire for parties and meetings.

Our regular events include bingo every Sunday from 8pm and our next race night will be on Friday, November 25. Tickets are £5 and there will be a free buffet and subsidised bar.

We also have excellent advertising opportunities, including advertising boards around our pitch at £100 for the first season.

Henley Town Football Club is based at the Triangle Ground in Mill Lane, Henley, RG9 4HB.