Mrs May takes time off to open church & community hall 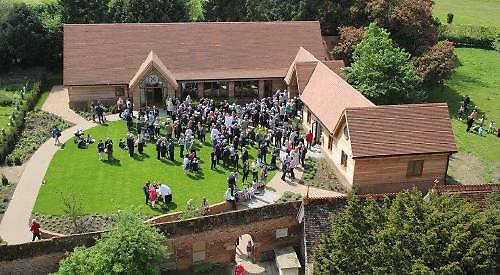 THE Prime Minister opened a new £590,000 parish and community hall at St Andrew’s Church in Sonning.

Theresa May and her husband Philip, who live in the village, attended a special opening service with about 400 guests.

Mrs May was shown around the building, which is known as the Ark, before unveiling a plaque. She said it would be a “wonderful addition” to the facilities at St Andrew’s.

Mrs May then had to leave because of her election campaign commitments but her husband stayed on her behalf while Lord Carey, the former Archbishop of Canterbury, dedicated the building and the new parish office.

The church’s junior choir and pupils from Sonning Primary School sang O What a Wonderful Scene from the musical Captain Noah and his Floating Zoo and head junior chorister Kate Rennie gave a reading.

Ruth Harper, 10, who attends the school and is a member of the church’s Sunday Club, read prayers based on the story of Noah’s ark which she had written herself. The Ark stands next to the churchyard and has a large main hall with a curved arch ceiling as well as a modern kitchen and toilet.

New lawns and shrubs have been planted including a yew hedge to separate it from the churchyard. More planting will take place over the coming month and parishioners are being encouraged to make donations in memory of loved ones.

The parish has raised £521,000 towards the project over the past three years, including donations totalling £150,000 from the Cayo Foundation and the David Brownlow Charitable Foundation. It also received £50,000 from Lafarge Tarmac, which owns the Sonning Works gravel pits. Parishioners organised a range of fund-raising events and hope to raise the rest in collections among the congregation.

Rev Jamie Taylor, vicar of Sonning, said: “We need space for our growing Sunday school and our new outreach programme, which will include a pensioners’ lunch club and youth club. The Ark has given us the facilities we need.”