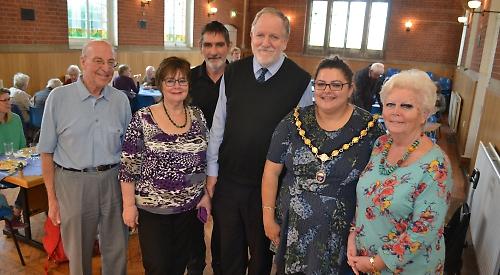 AN autumn fair held at Christ Church in Henley on Saturday raised £2,200.

About 300 people visited the church and community centre in Reading Road for the event, which marked the 300th anniversary of the church being on that site.

There was a range of stalls selling candles, clothes, books, toys, cakes, jams and preserves and arts and crafts staffed by more than 50 volunteers.

Members of the Busy Bee group, which meets at the Christ Church Centre every week, were selling gifts, clothes and accessories they had knitted, sewed or crocheted themselves.

There was also a tombola, craft activities for children, lunches and tea and coffee.

Father and son Brian and Graham Gegg played the organ in the church.

“It was an excellent event,” he said. “Opening the church up was a big plus in my opinion. A fair amount of people came and walked around.

“The money raised will go towards church funds to help with our maintenance. This is the only fund-raising event of the year that we do. It gets most of the congregation together so it’s a social event too.”

He said the total raised was up more than £300 on last year.

Minister Rev Glyn Millington said: “We had lots of visitors and lots of people I’d not seen before, lots of young people, which was great.

“We’re one of the hidden jewels of Henley. People don’t realise how much there is in the building so it’s great to have new people crossing the threshold and finding what there is.” Henley Mayor Kellie Hinton, who visited the fair, said: “I really love going to these kinds of things — I love a fete and a raffle — and Christ Church is such a great facility.”

Christ Church began in 1662 and the congregation initially worshipped in Harpsden Wood.

In 1679 Thomas Hall allowed the use of Bernard’s Barn for worship on Southfield, near the site of the present church, then still outside the boundary of Henley.

In 1719, the church building was erected on the present site.