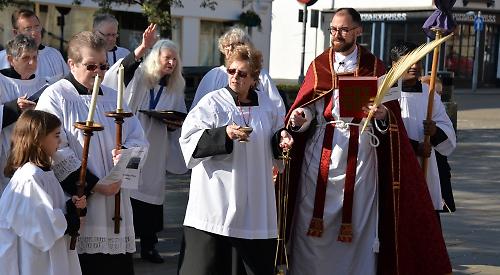 MORE than 20 people joined a procession in Henley to mark Palm Sunday.

The group gathered in Falaise Square at 9am and were led by a server carrying the cross, followed by members of the choir.

At the back was Rev Jeremy Tayler, the rector of Henley with Remenham.

The procession went through the square and down Hart Street to the west doors of St Mary’s Church as the participants sang the hymn All Glory, Laud and Honor.

Outside the church the Liturgy of Palms took place before everyone went inside for the eucharist service.

Rev Tayler, who started in September, said: “Palm Sunday is one of the big days of the Christian year. It’s the start of Holy Week as the church remembers the days of Jesus’s entry into Jerusalem and the days leading up to the crucifixion and, obviously, Easter.

“We’re marking what was a public event in a public way.

“It has not been done before in this way at St Mary’s but I thought we’d have a go.

“It’s good for visibility in the town so people know what’s going on. There’s a fun element as well.

“I think it was good. Of course you always want more but I was happy with who turned out.”

The rector said he would repeat the event next year.

• The Vigil of Readings will be held tomorrow (Saturday) in the Chantry House from 8pm and will be followed by a walk through the churchyard for the lighting of the Easter Fire.